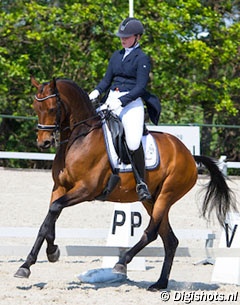 The 5-year old Harm G, the 6-year old Galaxie, and the 7-year old Fossbury became the winners of the fourth and final Dutch selection trial for team selection for the 2017 World Championships for Young Dressage Horses held in Ermelo, The Netherlands, on 3 - 6 August 2017. A nice class of 5-year olds and a considerably smaller group of 6 and 7-year olds contested the final qualifier in Uden on Sunday 28 May 2017 to obtain qualification for the semi-finals.

The Semi Finals will take place n n Etten Leur on 16 - 17 June, after which a final group will contest the Finals on 13 and 15 July 2017 at the Dutch Championships.

In the 6-year old category Diederik van Silfhout rode the licensed stallion Galaxie (by Jazz x Future) into the winner's curcle with 8.26 points. Tommie Visser and Gentle Whispering (by Jazz x Rhodium) were quite closely behind the winners' pair on a score of 8.18 points, while Adelinde Cornelissen and Goodman RWP (by Jazz x Lancet) was third on 80.0 points.

Only two combinations came to Uden for the 7-year old division so it was an easy win for Carlijn Vaessen and Fossbury (by Ampere x Sandro Hit) on a score of 73.87%, while Barcelona based Spaniard Agusti Elias was second with Fifth Avenue (by Romanov x Jazz) on 72.85%.