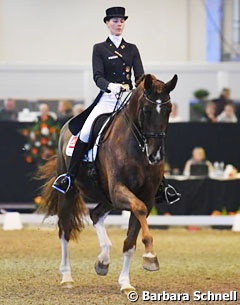 The Deutsche Bank Equestrian Sport Academy has successfully launched its "Mini Mentee" programme and assigned each member of the Academy a mentor role for a youth rider.

Deutsche Bank Equestrian Sport Academy was founded in 2015. In its second year 10 grant recipients were appointed in 2016 for the 2017 show season. The goal of project  is to help high performance riders on their way to sportive and professional success. They get individual training, access to selected shows in Germany and coaching by mentors of the Deutsche Bank for the development of their professional dressage career. The best performing grant recipient obtains a starting place at the 2017 CDIO Aachen in July.

"We really had a break out of sweat and discussed for a long time," said the Deutsche Bank selection committee about assigning the mentors to the right candidates.

Because of the success of the program, the Academy has relisted four academy alumni to help with the mentoring.  So for 2017 not 10 but 14 training collaborations have been assigned.

The Mentor - Student collaborations are:

All Mini Mentees are invited to attend the CDIO Aachen for one day and smell the atmosphere.