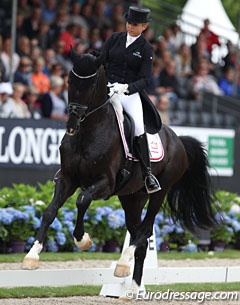 Dorothee Schneider and Sezuan will not be contesting the Nurnberger Burgpokal qualifiers for Developing Prix St Georges horses this 2017 show season. The pair has been withdrawn from the qualifier in Munich on Saturday 27 May 2017.

Sezuan's owners Arlette and Edwin Kohl of Gestüt Peterhof explained their 180 ° turn in an official statement.

"For the sake of the stallion and his outstanding perspective on Grand Prix sport, we decided not to have him participate in the qualifiers for the Nurnberger Burgpokal," said Kohl. "Sezuan is only 8 years old and we believe it is our duty and we count on his friends' and fans' understanding, that we carefully show him in sport with measure."

Bred by Linette Jaeger, Sezuan is a 2009 born Danish warmblood stallion by Zack out of Bogegardens Don Romona (by Don Schufro x Lionell). Under Dorothee Schneider he won the World Young Horse Championships in 2014, 2015 and 2016.