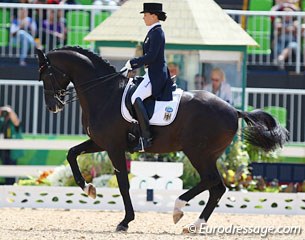 The German dressage team is dealing with two heavy blows. Two of its Rio Olympic Games team gold medal winning horses will not be fit to compete: Desperados and Showtime. Both horses are out of the running for team selection due to injury.

In 2016 the German dressage team was invincible, but for the 2017 the cards have certainly been redealt with two major assets not fit to compete.

Dorothee Schneider's Showtime has already been off since this winter and his last show was the CDI Salzburg in November 2016. Though the 11-year old Hanoverian gelding (by Sandro Hit x Rotspon) is back in training, but Schneider and owner Gabriele Kippert have decided to give him more time.

"Because of the short preparation time for the Europeans in Gothenburg, I have declined to participate in the team selection," Schneider explained. "Showtime is still young and we don't want to overask him. In agreement with Gabi Kippert and the DOKR selectors we decided on this path."

"I'm truly very sorry for both riders and horses," German team trainer Monica Theodorescu explained. "It's bitter for the team to miss out on two of our top horses for the championships. But it's top priority that Desperados and Showtime heal fully and they will get the necessary time for that. Our focus is on the 2018 World Equestrian Games, where we can qualify for the 2020 Olympic Games."

The German team still has two major powerhouses in Isabell Werth (Weihegold) and Sönke Rothenberger (Cosmo), but will need to look out for new options to continue its team gold streak. Jessica von Bredow-Werndl is also out because of her pregnancy. Other team candidates are A-squad members Anabel Balkenhol, Fabienne Lütkemeier, and Hubertus Schmidt. Schneider also has Sammy Davis Jr to ride.

The German team selection trials start in two weeks with the 2017 German Championships in Balve as first mandatory trial, followed by the CDIO Aachen in July.