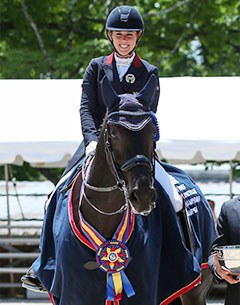 Grand Prix rider Kasey Perry-Glass, Under 25 rider Kaitlin Blythe and small tour rider Adrienne Lyle won the 2017 U.S. Dressage Championships - the Festival of Champions - which concluded on Sunday 21 May 2017 at the USET Headquarters in Gladstone, NK. On Sunday the third and final round featured the traditional freestyle classes.

Quality work was displayed by the combinations throughout the weekend. “It was fun because it was up and down a little bit from one class to the next so I really didn’t know who was in the lead coming into today. I think clearly everybody made their best effort today,” commented Gary Rockwell, President of the Ground Jury. “We had some really good rides today. We need depth in this country. We can see some good young horses and young riders coming up, so that is our future; we need to support and encourage them and give them a chance.”

A disappointingly small but talented field of seven combinations competed for top honors in the U.S. Grand Prix Championship with 45%, 40%, and 15% of their overall championship score coming from the Grand Prix, Grand Prix Special, and Grand Prix Freestyle, respectively.

“The whole entire show was really not our best show, but you kind of need those, especially since it is our second year at Grand Prix; our first year was kind of a whirlwind. We have been picking on the small stuff and sometimes it all gets little bit dysfunctional when you are picking on the small stuff,” Perry-Glass explained. “I am proud of us for fighting through it and keeping our heads up and going. Having the support of [Adrienne Lyle and Olivia LaGoy-Weltz] and my other teammates has been great, and it is fun to compete here. I feel pretty lucky.”

Adrienne Lyle (Ketchum, Idaho) and Salvino received the Reserve Champion title after finishing on an overall score of 71.344%. They had a flowing performance in the Grand Prix Test to finish second with a score of 70.600%, and were second again in the Grand Prix Special, despite bobbles in the first piaffe and the one tempi changes, with a score of 70.314%. Lyle and the Salvino Partners, LLC’s 2007 Hanoverian stallion finished the championship on a high note by winning the FEI Grand Prix Freestyle with a score of 76.325%. Lyle used the music from her freestyle with Wizard, her longtime partner and 2012 Olympic Games mount, and changed the timing to match Salvino’s movement.

“I had a blast in my test today. We have never done the freestyle, so we pulled it together quickly. It was Wizard’s freestyle and we edited it time-wise to match his big stride. Terry Gallo did a great job with me calling last minute,” Lyle said. “I was thrilled with how Salvino handled it. I wasn’t sure what he was going to be like with the music and the crowd, there was a lot of stuff happening. I couldn’t be happier with what he gave me.”

Sixteen combinations rode for the title in the U.S. Intermediaire I Championship with 40%, 45%, and 15% of their overall championship score coming from the Prix St. Georges, Intermediaire I, and Inter I Freestyle, respectively. 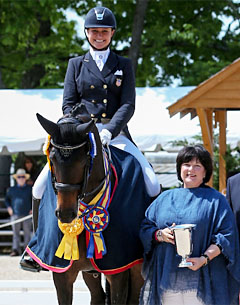 “That mare is so fun in the ring. She loves to get out there and perform. When she is on, you just have to sit there and pilot her through it,” Lyle said. “I borrowed that music from Katherine Bateson-Chandler, so thank you to everyone who helped me get to the championships.”

“[My ride] was so much fun. We did better today than before. She was better today than she has been all week,” Cleveland said. Elaborating on what it is like to ride at the USET Foundation headquarters, Cleveland said, “It is special for a few reasons. The barns are exquisite and they have so much history. There is a plaque of famous horses on each stall…I had the opportunity to ride here five years ago, and I learned that if you get the opportunity to ride here, you get here.”

A field comprised of seven rising stars competed for the title in the U.S. Under 25 Championship, which in America is called the Young Adult “Brentina Cup” Dressage National Championship with 40%, 45%, and 15% of their overall championship score coming from the Intermediaire II Test, Short Grand Prix, and Under 25 Freestyle, respectively. 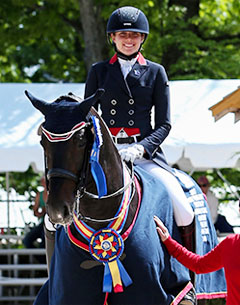 “I’m thrilled with my horse. He loves the freestyle. It is his favorite thing; he just lights up in the arena. I cannot believe this is real life, actually; it is so surreal. I’m so thankful for everyone who helped me get here,” Blythe said.

“He was awesome today. He really likes the freestyle; he gets way more active and energetic. I was really happy with a completely clean test,” Pai explained. “This whole weekend I can’t believe I was able to really step it up and make every single set of changes clean. He was so good this weekend and today really tried his best.”

Molly Paris (Charlotte, N.C.) and Countess finished third in the championship with an overall score of 65.992%. They had a great performance to win the Intermediate II with a score of 67.079% and put forth a solid effort in the Short Grand Prix to place third with a score of 64.698%. Paris and her own 2002 Danish Warmblood mare performed their Freestyle with a high degree of difficulty which included passage half-passes and extended canter to canter pirouettes. However, they had some miscommunications, but finished second with a score of 66.975%.