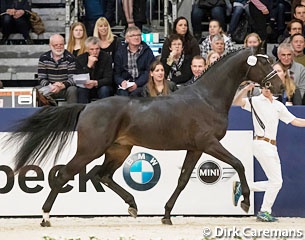 Two stallions - Just Wimphof and Jerveaux - became the high scoring horses at the 2017 KWPN Spring Stallion Performance Testing which concluded in Ermelo, The Netherlands, on 20 May 2017.

Out of the 13 stallions entered for the 2017 Spring 70-day testing, only six graduated and now got permission to breed for the KWPN society. They scored 75 points or more to pass the testing.

"We were able to approve six very fine stallions, each of them with good character and rideability," said Bert Rutten, chair of the KWPN Stallion Licensing committee. "Also concerning blood diversity, they are relevant," Rutten added. "Most stallions performed very consistently the past ten weeks and they convinced us in almost all criteria. To approach the goal of breeder, we specifically looked for talent for the upper level movements. Besides that talent we also valued the rideability of the stallions and are happy to approve six."

With the approval after the successful testing of the stallion, the KWPN society and owners have changed several of the original names of the stallions for marketing reasons.

The top scoring stallions were Just Wimphof (by De Niro x Riccione x Sandro Hit), bred by Carla Kramer and owned byKramer, E. Rienks and Joop van Uyters. With 86 points in total, the stallion got 8.5 for walk, trot, canter, suppleness, and self carriage and 9 for rideability and dressage potential.

The same top score was achieved by Jerveaux (by Ferdeaux x Jazz), bred by the Beijer family and owned by Stable Brinkman and Gerard Korbeld. He scored 86 points with 8.5 for walk, trot, canter, 9 for supplenesss and self carriage and 8.5 for rideability and dressage potential.

The second high score was achieved by James Bond (by Desperado x Fidertanz x Charon), bred by F. Baumler and owned by Ad Valk and Piet Kuijpers. He scored a total of 85 points with 9 for walk, 8.5 for trot and canter, 8 for suppleness, 8.5 for self carriage, 8 for rideability and 8.5 for dressage potential. James Bond was originally named Jansen when he began the testing.

Jay Destino (by Danciano x Diamond Hit x Belissimo M) scored 82 points with 7.5 for walk, 8 for trot, 9 for canter, 8.5 for suppleness, 8 for self carriage, 8.5 for rideability and 8 for dressage potential. Bred by Paul Schockemohle' the Oldenburg registered Jay Destino is originally named Destino in Germany.

Jamaica (by Desperado x Wynton x Contango) scored 80.5 points with 8s for walk, trot, canter, suppleness, self carriage and dressage potential and 8.5 for rideability. Jamaica was originally named Jesperado KM when he began the testing.

Just For You (by Uthopia x UB 40 x Flemmingh) was the sixth stallion to pass the testing with 78 points. He got 8 for walk, 7.5 for trot, 8 for canter, suppleness, and self carriage, 9 for rideability and 8 for dressage potential. Just For You was originally named Jonkheer ter Wincke when he began the testing.