Lagoy-Weltz and Pai In Command on Day Two at the 2017 U.S. Dressage Championships 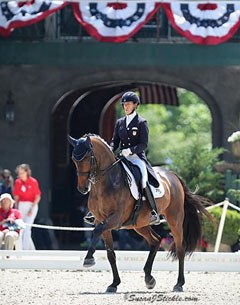 The 2017 U.S. Dressage Championships continued on Friday 19 May 2017 at the United States Equestrian Team (USET) Foundation headquarters at Hamilton Farm as the Grand Prix and Under 25 riders performed their second tests before the final test on Sunday. Olivia LaGoy-Weltz and Lonoir and Natalie Pai and Unlimited finished atop the standings in their respective classes with improved performances from Thursday.

LaGoy-Weltz (Haymarket, Va.) and Lonoir performed a beautiful test to earn a score of 70.686% to win the FEI Grand Prix Special. Aside from one bobble in a passage movement, the pair showed good consistency throughout the test. LaGoy-Weltz and her own 2004 Danish Warmblood gelding had several nice movements, including their half-passes.

“We are just getting used to [the Grand Prix Special]. Adrienne and I were talking about it, and when you bring one up, they are like, ‘Okay, I’ve got the Grand Prix,’ and then you start working on the Special and they are like, ‘No, no, no, the twos go on this diagonal and the ones go on this diagonal,’” LaGoy-Weltz said. “He is just starting to know this test as well. He’s a very helpful horse, so the more he knows his test, the better he actually is.”

Adrienne Lyle (Ketchum, Idaho) and Salvino had a quality test to finish in second place with a score of 70.314%. Salvino Partners, LLC’s 2007 Hanoverian stallion has only competed in a few Grand Prix Specials, and had a few bobbles, but was guided well by Lyle. Though Lyle and Salvino had miscommunications in the first piaffe and the one tempi changes, they finished strongly with some moments of brilliance.

“I thought parts I wanted to improve upon from yesterday were better and the trot work and passage work was stronger today,” Lyle stated. “Overall, I was really happy with him. I thought he showed great potential for high scores. He is still very green at this; I’m very excited about the quality we have been able to get out of him.”

P.J. Rizvi (Greenwich, Conn.) is competing in her first Festival of Champions, but she seemed right at home with the experienced field. She and Breaking Dawn had a good test to finish in third with a score of 69.569%. Despite getting a bit nervous before going into the ring, Rizvi rode her and trainer Ashley Holzer’s 2001 KWPN gelding well after getting encouragement from her fellow competitors.

Kasey Perry-Glass and Goerklintgaards Dublet, who finished only sixth with 68.529% after a mistake filled Special ride, still leads the overall championship standings, followed by LaGoy-Weltz and Lonoir and Lyle and Salvino in second and third, respectively. The Grand Prix combinations will earn the remaining 15% of their championship score from Sunday’s Grand Prix Freestyle.

Pai Wins the Short Grand Prix in the U25 Division 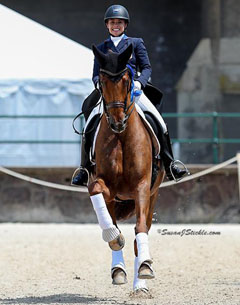 Natalie Pai (Wellington, Fla.) improved upon her Thursday performance with Unlimited to win the Short Grand Prix 16-25 Test with a score of 66.605%. After struggling to nail both sets of tempi changes in competition during the five months they have been together, Pai was thrilled that she and Peacock Ridge, LLC’s 2001 KWPN gelding had clean one and two tempi changes. She aims to continue the momentum into the final test on Sunday.

“I really wanted to take more risks today; I wanted to have a little bit more of a go button. I usually ride a little conservatively, so I asked him to go a little more,” Pai explained. “I have been really struggling with my changes all season, and this was the first time I actually nailed both, so I was really happy with him. He was fantastic.”

Kaitlin Blythe (Rougemont, N.C.) and Don Principe performed a nice test to finish second with a score of 66.000%. Blythe plans to make the most of her final year in the U25 division and has been gaining valuable experience from Maryanna Haymon’s 1999 Hanoverian stallion. Eventually she will move up to the open Grand Prix division, but in the meantime, she hopes to earn a top finish in Gladstone.

“I was really, really happy with my horse today,” Blythe said. “He usually has a harder time on the second day; he gets a little tired, but he surprised me today with how much energy he had.”

Molly Paris (Charlotte, N.C.) and Countess tried to be bolder in Friday’s test and delivered a respectable performance. Paris and her own 2002 Danish Warmblood mare finished third with a score of 64.698%. Making their farthest trek north to date to compete, Paris and Countess hope to make it worthwhile with another solid performance on Sunday.

Pai and Unlimited lead the overall championship standings, followed by Blythe and Don Principe and Paris and Countess in second and third, respectively. The “Brentina Cup” combinations will earn the remaining 15% of their championship score from Sunday’s Grand Prix Freestyle 16-25.