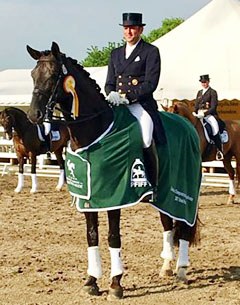 The Krefeld based Heiner Schiergen renewed his title of German Professional Dressage Rider Champion, by winning the 2017 Championships which were held at the Massener Heide equestrian centre in Unna, Germany, on 12 - 14 May 2017. This is Schiergen's third, consecutive title but this year he achieved it on his new ride, Aaron.

Laura Blackert (née Stigler) landed second place in the Grand Prix and Special with the Walterscheidt family's 11-year old Oldenburg gelding Rasputin W (by Rooney x Donnerhall) on a score of 70.567% and 71.046%.

Sixteen riders contested the Grand Prix for the 2017 German Professional Dressage Riders Championships, but only the top three moved to the Finals with Horse Change in which each rider rides the Short Grand Prix test on three horses (78.380% on Aaron, 73.056% on Peppo and 74.815% on Rasputin W). Schiergen reigned supreme as he produced the highest score on all three horses (Aaron, Peppo, Rasputin W). He impressively earned the gold medal and his third title in a row and the fourth in his career, as he also won the 2007 Championships. Schiergen, who did his apprenticeship in the 1980s with Jan Bemelmans, now holds four titles. However, Hubertus Schmidt still holds the record with five titles. The 28-year old Tobias Nabben ended up with silver and Laura Blackert was good for bronze.