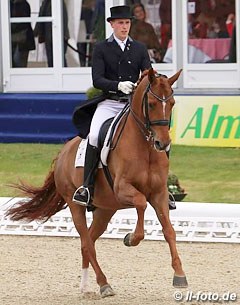 Frederic Wandres and the 10-year old British Hanoverian bred Duke of Britain won the Louisdor Cup qualifier for Developing Grand Prix horses at the 2017 CDI Hagen - Horses & Dreams Meets Austria - on Monday noon 1 May 2017. The fifteen highest scoring combinations from the warm up round were eligible to ride in the actual qualifier on Monday.

Frederic Wandres and the British Hanoverian Duke of Britain (by Dimaggio out of Real Gold (by Rubinstein)) topped the board with a big score of 74.372%. The chestnut gelding showed much promise in both the piaffe and passage, producing a very pretty silhouette and good airtime, but the gelding still lacked strength. The swooshing tail and sometimes leaning in the contact stand proof that the required movements are still a big task for the horse, who nevertheless willingly executes them to the best of his abilities at this moment. The extended walk was outstanding. In the canter pirouettes Duke of Britain showed very good ability to collect. They were still quite big, but the right one was lovely. The two tempi changes very very nice and uphill, the ones correctly executed but could cover more ground.  Four judges placed the pair first (Von Platen, Nivelle, Lehrmann, Wemhöner) but 5* judge Eisenhardt had them slightly lower with 72.558%.

Duke of Britain is not an unfamiliar face. Bred by Tony and Sarah Pidgley in the UK, the chestnut gelding sold for for 360,000 euro to Victoria Michalke at the 2011 PSI Auction. Michalke finished fourth with him at the 2013 World Young Horse Championships in Verden and continued to compete him through 2015. The horse moved back into ownership at Hof Kasselmann in 2017 and Ullrich Kasselmann allocate the ride to assistant trainer Wandres.

"I am totally satisfied and happy that I am even allowed to ride such a horse,” said the 30-year old Wandres. "It's just fun, lots of colleagues know that: I get up in the morning, and think about how I can structure my training. And when it works like today it's perfect!" 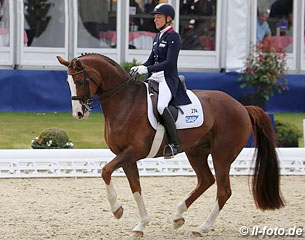 Ingrid Klimke and Canadian Faith Berghuis' 9-year old Rhinelander mare Geraldine (by Furst Grandios x Tolstoi) improved on their performance in the first round. The chestnut mare is beautifully schooled and time and time again Klimke presents horses with impeccable training and in the proper classical frame. Nothing is different with Geraldine. The mare showed nice lengthening  of the frame in extended trot, fluent trot half passes and nice relaxation in the extended walk with good overstep. The passage was regularly but not collected enough. In the onset of first piaffe the horse got a bit wide behind, but then she found her rhythm. The silhouette was super in the second piaffe and she got the rhythm almost right. Geraldine was nicely uphill in the extended canter, but in the pirouette left, she failed to show proper striding, but instead skipped around. The right pirouette was better, but needed much more bending and flexion round the inside leg. The tempi changes were solid. In the final passage on the centerline she lost the hindlegs. The piaffe at X was promising, but she side stepped with the left hind. Overall it was a very soft and easy looking round, definitely with a lot of promise for the future. The pair scored 73.000%. 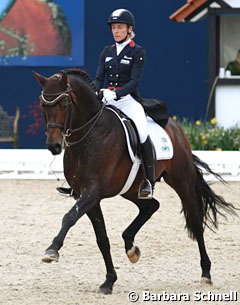 Klimke also finished third on Wilhelm Holkenbrink's 9-year old Hanoverian stallion Franziskus (by Fidertanz x Alabaster). The very popular breeding stallion showed huge trot extensions but got wide behind. The trot zig zag was a bit unsteady in the flow, which also showed in the head-neck position which could have been more settled in the trot and piaffe-passage work. The first passage lacked some collected and the first piaffe was hesitant, the second passage was better, but there was a loss of impulsion in the transition into the second piaffe. The extended walk was good, but could have had even more overstep. Franziskus showed a very nice uphill extended canter, the pirouettes were still a bit big but showed the horse's good potential for collection. The two tempi changes were very nice, but in the ones Franziskus lost some forward drive, especially in the changes to the right.  There was a hesitant transition into passage, but the piaffe at X was good. They scored 72.116%. 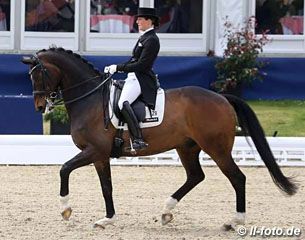 Certainly one of the standout horses of the day was Carola Koppelmann's 10-year old Mecklenburger bred Sandiego (by Sancisco x Davignon). The tall bay gelding probably could and should have won the class had there not been a big booboo in the one tempi changes. His trot extensions were gorgeous, the balance in the trot zig zag was very good, but the nose needed to be a bit more out. The extended was good, but Sandiego got a bit distracted in the collected walk. There was much power int he canter extensions, the two's were very uphill, there was a loss of impulsion in the small, right pirouette. The passage is very elegant and light-footed and only on the centreline he slightly lost the regularity. The first piaffe was quite timid, the second had a good rhythm and the transitions were fluent. Sandiego's piaffe steps are not yet the biggest, but the horse shows them with confidence. They scored 72.023% for fourth place. 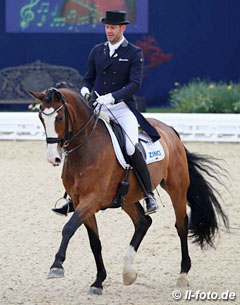 Marcus Hermes and Jasmin Troike's 10-year old Hanoverian gelding Rovereto (by Rousseau x Wolkenstein II) slotted in fifth with 71.302%. The chunky bay gelding scored well with his solid passage work in which the regularity was good, but the horse needs to develop more strength behind. The transition into the second piaffe was nice, and the piaffe had good rhythm, but Rovereto still leans on the forehand. The best part was the final centreline on which the piaffe steps at X were really nice. Overall the transitions were not too bad for a developing GP horse. Unfortunately in trot, the gelding needed more elasticity and swing in the back as the half pass right and extended trot missed some bounce and flow. The extended walk was outstanding, the extended canter uphill. The left pirouette was nice, the right one still quite big. Rovereto got a bit sour in the two tempi changes, but produced impressive flying changes nonetheless. 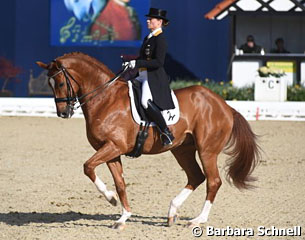 Absent from the Louisdor Cup qualifier were the fourth placed pair of the warm up class, Isabell Werth and Madeleine Winter-Schulzer's 9-year old Westfalian gelding Quintus (by Quaterback x Florestan). The horse scored 70.816% but was quite intimidated by the show arena. He also developed a temperature on Sunday night and Werth withdrew from competing him.