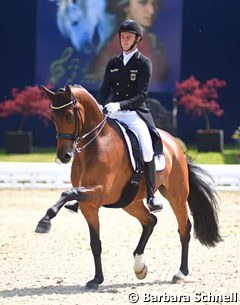 With an exceptional ride the 22-year old Sönke Rothenberger and his 10-year old Dutch warmblood Cosmo have come of age in the Grand Prix Special on the final day of competition at the 2017 CDI Hagen - Horses and Dreams Meets Austria - at Hof Kasselmann in Hagen, Germany, on Monday 1 May 2017. With a personal best score of 81.706%, Rothenberger can now be considered as one of the individual medal contenders for the Europeans this summer.

The hyper sensitive show jumping bred Cosmo (by Van Gogh x Landjonker) has already proven his worth on the German Olympic team by winning team gold at the Rio Olympics last summer. Rothenberger and Cosmo have produced fantastic rides in the 2016 show season, but there were always small baby mistakes or immaturity flaws which kept them from flashing at the top of the board with over 80%.  Today, that baby period seems to have ended with the pair coming of age after an 81.706% earning Grand Prix Special ride.

The quality of the test was world class! Cosmo showed very elastic trot extensions, but on the first diagonal he was not entirely straight. The passage was sensational: so active, so regular, so springy. One only could have wanted the rider to keep the hands even more still on the withers instead of bouncing with the rhythm of the horse. Nevertheless, the contact with the bridle was featherlight. The extended walk lacked relaxation and was slightly hurried. Cosmo anticipated the piaffe and lost the collected walk, but the piaffe itself was very nice and rhythmical. The second piaffe was much too forward, but the transitions were superb. Also the canter strike off could have been a bit more forward. Both diagonals with tempi changes were fantastic, the change after the canter half pass left was short. The pirouettes had good collection but could even be smaller. The one tempi changes on the centerline were a bit crooked to the right.  The final centerline had outstanding rhythm and bounce.

"I am more than satisfied! Cosmo is one of the youngest horses in this class, and I am incredibly proud of how he has developed over the winter and how he performed here," gushed Rothenberger. "We definitely wanted to be here for the first viewing in Hagen (in front of team trainer Theodorescu), because there are so many top riders here from many nations on the start, and then you know exactly where you are in comparison to the international field." 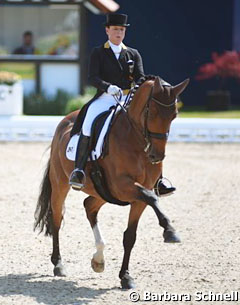 Isabell Werth and Madeleine Winter-Schulze's 11-year old Emilio (by Ehrenpreis x Cacir Aa) finished in second place with little over 1% less than Sönke on a total of 80.627%. While Werth and Emilio produced a very strong test, the quality gap with Rothenberger's superb ride was not accurately expressed in Werth's score. The discrepancies between the judges said it all: 81.471% (Holler) was the high score and 76.863% (Romanov) was the low score. So either Werth was generously scored, or Sönke did not get enough...

Werth's Emilio is a very sympathetic fellow to watch. He showed big trot extensions and has a very springy passage, but today the hind legs could have moved more under the body towards the point of gravity and on occasions there was more push with the left hind leg. The transitions were between passage and extended trot were immaculate. Emilio should have swung a bit more at the end of the left half pass. In the extended walk there were one or two hooves overstep, but the rhythm was not always at its best. The first piaffe was nice, but a bit crooked, in the second piaffe he almost lost the forward tendency but it super on the spot. The two tempi changes were straight, but in the ones the rider was swinging heavily in the saddle to make them work and they lacked of ground cover. Also the ones on the centerline had a lot of swing in front. This made one wonder, why today the rider got two 10s for seat and aids in the collective marks. The canter extensions were very nice, the pirouettes small. The energetic passage became crooked to the right on the final centerline (still scored straight 8s), but the piaffe at X was really good. 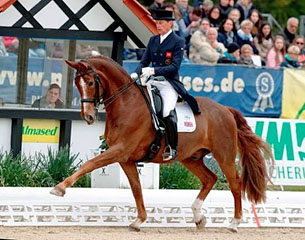 British Emile Faurie achieved a career personal best score in a technical test by finishing third on Ullrich Kasselmann's 16-year old Oldenburg gelding Weekend Fun (by WeltHit II x Rubinstein). In a massive field of Germany's and Denmark's top dressage rider, Faurie captured third place with 74.137%. While the liver chestnut Weekend Fun is not the most electric and powerful horse from behind, his obedience and submission were exemplary today. The pair began with fluent trot extensions and passage transitions. In the passage he was very regular, even though he toe-dragged a bit instead of pushing from behind. The hindquarters trailed at the beginning of half pass left and the right half pass could have been more regular. The extended trot needed more overstep but had good relaxation and stretch. The first piaffe was nice but the transition out could be more engaged. Weekend Fun has a beautiful silhouette in piaffe but the second one needed a bit more energy. The tempi changes were all correct, the pirouettes small and throughout the test Weekend Fun was consistent in the bridle. 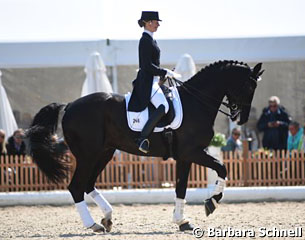 Fabienne Lutkemeier and the 10-year old Bavarian bred Fabregaz (by Florestano x Ragazzo) tied in third place with the same 74.137% score. The very talented, young gelding has a very nice, off the ground passage, but was not always entirely regular with more right hindleg activity. The half pass to the right could have had more elasticity but the piaffes were nice and rhythmical, yet slightly forward. Fabregaz produced big sweeping half passes in canter, but there was a counting error in the two tempi changes. Also in the canter extension he made an unscripted flying change.  The horse shows good ability to collect in the pirouettes but the right one was a bit big. Lutkemeier ended with a lovely final centerline.

Anabel Balkenhol and her 17-year old Hanoverian gelding Dablino FRH (by De Niro x Wanderbusch II) had a highlight ride today but the judges were very economical with their points. They scored 73.882% and that could easily have been more even though there was a mistake in the one tempi's on the centerline. Dablino was very attentive to his rider today. He showed very cadenced and light passage, but the trot half pass to right could have been smoother. Dablino's weakest gait, the walk, was pretty ok today. The extended walk not too bad with good overstep, but he's never very focused on the aids in them, looking around. The first piaffe was timid, the second much better but not on the spot, an issue Balkenhol has been losing points on for years. The tempi changes on the diagonals were world class, the extended canter outstanding. The pirouettes were small but the right one got a bit quick.