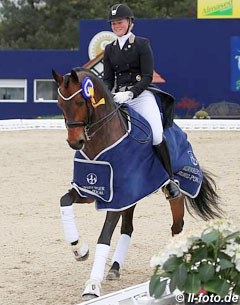 After winning the warm up round on Thursday, Nilsson upped the ante in the actual qualification test on Saturday afternoon 29 April 2017. The Nurnberger Burgpokal show circuit was established in 1992 and is Germany's Developing Prix St Georges Horse Championship. A series of qualifiers take place in the spring and summer, but the finals are annually ridden at the CDI Frankfurt in December.  This allows for the 7 to 9 year old horses, who are eligible to compete on the circuit, to mature more throughout the year as they slowly turn into established Prix St Georges horses.

Malin Nilsson rode the 7-year old Foreign Affair (by Rock Forever x Scandic), bred and owned by former Dutch team veterinarian Jan-Willem Greve, to the top of the board in a field of 12 competitors. 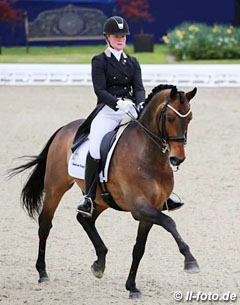 The bay gelding impressed with his big, ground covering trot and canter extensions and his very nice, straight and uphill tempi changes. In the trot half pass to the left the hindquarters trailed and although the trot work was very cadenced and big, a bit more collection would have been ideal. The horse was tight in the neck throughout the ride and his tail swooshing heavily proved his immaturity for what was being demanded. In the extended walk Foreign Affair had two hooves overstep, but the rhythm was not ideal, also the collected got slightly tense in the back. In the final rein back on the centreline he resisted to step backwards. Nevertheless, the horse has huge scope in his movements and all the potential is there for the upper level work. He just needs to develop more self-carriage in time.

Foreign Affair scored a winning total of 74.976% and had four judges on the panel convinced (Lehrmann, Wemhöner, Nivelle, Esienhardt). Only the judge at E, Ute von Platen, rewarded the ride with 71.829%.

“He is just such a well behaved horse,” gushed Marlin Nilsson, who works as an assistant trainer for Patrik Kittel. “He is a great show horse. When he is in the stable he is very relaxed, sleeps a lot, and does not want to be disturbed, but as soon as I sit in the saddle he gets going, then he only wants to go forward, and present himself well. And he loves the audience the more people and the louder the music, the better and bigger he gets.”

Helen Langehanenberg rode Paul Ferry and Carl Louis Ferdinand's Hanoverian mare Brisbane FE (by Belissimo M x Furst Heinrich) to a second place. The 8-year old chestnut mare produced swinging trot work that was very forward and fluent. A tiny bit more collection would have been nice. Her extended walk was superb, but in the turn on the haunches she lacked some engagement from behind. The half pirouettes in canter were promising. The mare did give a sour expression with ears flat in both the trot and canter extensions. The flying changes were confirmed, but need to develop more uphill tendency. The rein back was nice. They scored 73.146%. 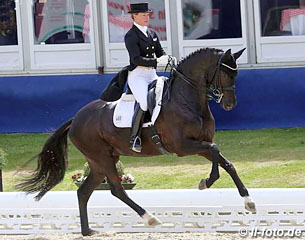 Kira Wulferding and Birgit Kalvelage's Oldenburg mare Soiree d'Amour (by San Amour x Latimer) were the last pair to go in the class and climbed up to a third spot on the ranking. The gorgeous, feminine looking 8-year old mare is very impressive in front with a lot of shoulder freedom and knee action. The first trot extensions could have had more overstep, the second was really nice. The extended walk was good but Soiree lost some activity in the turns on the haunches. In the collected canter and counter canter, the mare still lacks true self carriage, but she was very willing and eager to work with her rider. The tempi changes were forward. They scored 72.439% but had the judges not on the same wavelength. The low score was 69.756% (Nivelle) and the high score was 74.512 (Von Platen). 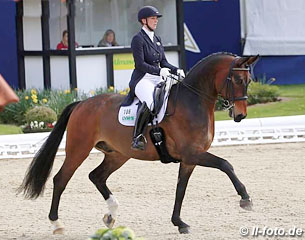 Anabel Balkenhol and the Brazilian co-owned Hanoverian gelding Crystal Friendship (by Fidertanz x De Vito) were considered the favourites for the victory after a very strong ride in the warm-up round, but Balkenhol could not make it work as smoothly today. Her tall powerhouse gelding has huge trot extensions, but the rider was quite restless with her hands in them. The right half pass had the hindquarters trailing a bit. The extended walk was excellent: engaged, over the back, and with good stretch forwards. The turns on the haunches were well ridden, but the right one was the better, smaller one.  The right canter half pirouette was slightly unbalanced, and the horse dropped into trot before the left one. The tempi changes were big, but could have had a bit more forward-upward tendency. The tempi changes every three strides was the best diagonal. In the rein back Crystal Friendship, who is a full brother to licensed stallion Foundation, got  wide behind. They scored 72.146% for fourth place.

Stefanie Wolf and the 8-year old Rhinelander mare Saphira Royal (by San Amour x Monteverdi) completed the top five with 71.707%. Wolf has been riding the mare for several years now, but only recently for a new owner. The black beauty sold to Russian Elena Knyaginicheva, who also owns the double World Young Horse Champion Sa Coeur. Saphira Royal showed very elegant trot extensions and had good bending in the half passes. The extended walk had a very pronounced, clear 4-beat rhythm with good overstep. In canter her hind leg reaches under with each stride, but in the extensions she gets a bit quick and loses pronunciation in the 3-beat rhythm. The same happened in the counter canter. The tempi changes were very straight, but in the three's one change was short behind. In the final trot extension on the centerline she got slightly wide behind. Throughout the ride the contact was very consistent and light.

Eurodressage Coverage of the 2017 CDI Hagen