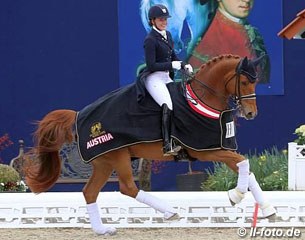 Dufour and her 14-year old Danish warmblood Cassidy (by Caprimond x Donnerhall) showed with a combination of correct classic riding and bags of talent can do. The canter work was outstanding with its incredible amount of control. The horse nicely up in the bridle, light in the contact and the nose slightly out. The one tempi changes and extended canter were excellent, the two tempi changes relaxed, the pirouettes small. The horse is active in passage but the hindlegs barely move under the body despite the energetic push from behind. The first piaffe has some backward tendency, the second one was the best, in the third the horse got slightly wide behind to improve its balance. The extended walk had very good swing and ground cover. It was a wonderful ride to watch and the first place was deserved.

The Grand Prix for freestyle was judged by Dietrich Plewa (GER), Alban Tissot (FRA), Elisabeth Koffmann (AUT), Evi Eisenhardt (GER) and Yuri Romanov (RUS) and the panel could not always find the same stride in their scoring. Dufour scored a total of 75.960% with her highest mark being 77.90% (Tissot) and her low score 72.900% (Koffmann).

"When my family originally wanted to buy him, we were told that he would be a great horse for the small tour, but not for the grand prix sport," said Dufour at the press conference. "I tried it anyway, and it has been working really well since last year. Cassidy is a real joy for me. It has been an incredible experience for me, for us to come this far together” 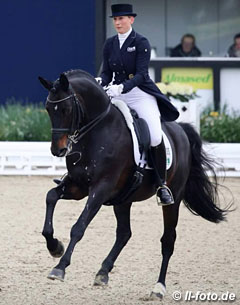 Anabel Balkenhol is trailblazing her way to the German top with her youngest Grand Prix horse, the 10-year old Trakehner stallion Heuberger (by Imperio x Michelangelo). The contact with the bridle was wonderful, with the horse chewing on the bit, up in the frame and always lightly reaching for the contact. The trot half passes had exemplary bending, the extended walk was outstanding, the tempi changes super straight and ground covering, though can still develop a bit more uphill tendency. In passage the horse has a lovely silhouette but there was still some tension in the back. In the trot extensions, the stallion also tightened the back and did not swing enough through the body. The piaffes still need a bit of work, but all the potential is there. The lift and spring are there, the willingness to do them as well, but they were too forward. Young Heuberger ran out of steam on the final centerline and began to move the hindlegs out. The pair scored a well earned 75.380% with 72.300% as low score (Eisenhardt) and 76.800% as high score (Romanov).

"I am very happy with Heuberger TSF, he has once again proven that in the competition ring he is able to raise the level even more, that’s just a great feeling," said Balkenhol.

Fabienne Lutkemeier and her 17-year old Hanoverian gelding D'Agostino (by De Niro x Shogun xx) are always good for consistent rides, but today his mileage started to show a bit with some irregularity in the trot extensions and the right hind leg toe dragging in the passage. The piaffes had a very good rhythm but the horse refuses to take the weight on the hindlegs. The tempi changes are the real highlight of this horse: uphill, ground covering and dead straight. Also the extended canter was superb, despite the very early flying change. They scored 74.220% for third place.

"D’Agostino FRH has been in my stable since 2008, I find he is doing really well, you can’t tell that he’s 17 years old," said Lutkemeier. "Actually the opposite, he is very motivated, and I am so excited about that. He always shows just how much fun he has in the sport." 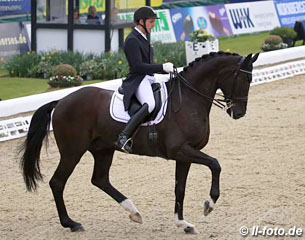 Spanish Severo Jurado Lopez and Marianne Helgstrand's 14-year old Hanoverian gelding Deep Impact (by De Niro x Rubinstein) made their first outing outside Denmark and immediately scored a third place with 73.800%. Jurado Lopez executed a very impressive round on the black which Andreas Helgstrand bought for his wife Marianne as a birthday present in Hungary. Deep Impact showed beautiful trot extensions, but the half pass left gad too much tendency for passage at the onset, the one to the left was more rhythmical. The passage work was very impressive, and the piaffe is energetic but still on the forehand. Also the transitions into piaffe could be more fluent. The horse showed a good extended walk, but collected needed to be a bit more collected. The transition to canter was crooked. The pair rode very solid tempi changes the zig zag got a bit tense, but the pirouettes were small. The transition down to trot went via walk, but the final centerline was active and cadenced. 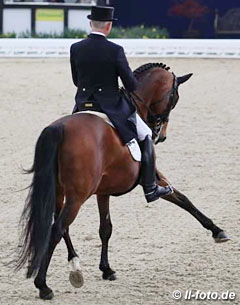 Hubertus Schmidt and 14-year old Trakehner stallion Imperio (by Connery x Balfour xx) interrupted their World Cup campaign this winter to prepare for the outdoor season. In Hagen the combination stood out with wonderful trot extensions, sweeping half passes in which the stallion throws out his front legs but fortunately sufficiently tracks up behind. The rein back was nice. The extended walk was very good. In passage the stallion could have more push and power from behind. Today the piaffes were all laboured with the horse struggling to find rhythm and cadence. The piaffe at X was the better one. The canter pirouettes were nice, though the right one was big, there was a mistake in the two tempi changes, the ones were better. They scored 73.420% for fifth place.

Swedish Patrik Kittel bought his parents-in-law's 11-year old Oldenburg gelding Delaunay (by Dr. Doolittle x Feinbrand) to Hagen. The horse has a lovely side silhouette in piaffe and passage but today he was consistently dropping in the contact, his head quite unsteady and tipping behind the vertical. He also regularly tilted the head to the right. The extended canter was lovely, the zig zag a bit laboured but correct. They finished sixth with 72.980%. 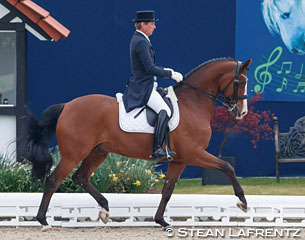 Charlott Maria Schürmann and the 14-year old Hanoverian stallion Burlington (by Breitling W x Rohdiamant) showed good improvement in their work today. The gorgeous chestnut stallion recently came back from injury and showed progress in the piaffe. He produced more lift in his legs, even though they were ridden too forward. In canter the rider could sit more quietly in the saddle in the tempi changes. Overall the test was a very consistent ride that put straight sevens or more on the board. They got 72.680% for 7th place.

A brand new combination made its debut in Hagen: British Emile Faurie on Elena Knyaginicheva's 13-year old Hanoverian gelding Lollipop (by Lord Sinclair x Welt Hit I), who was previously ridden by Steffen Frahm. As first starter in the class, Faurie immediately set the bar high with nice piaffe and passage work. This new pair just missed a bit of fine-tuning as they need to get to know one another better. More is definitely in the tank. They got 72.460%. 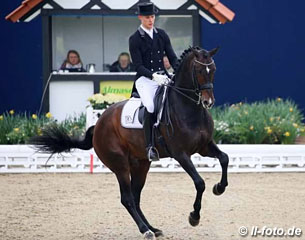 Danish Daniel Bachmann Andersen rode Blue Hors stud's KWPN stallion Zack (by Rousseau x Jazz) to a 72.000% score. The licensed stallion produced active half passes, but the rein back was a bit tense. In the extended trot he should have more swing over the back. The collected walk was good but the head a bit unsteady. In passage Zach is very active and expressive, but in piaffe he needs to get slightly more confirmed as he tends to drop on the forehand or creep forward. The horse still relies much on the support of the rider in the tempi changes, but both the ones and twos were ground covering and uphill. The pirouettes were small. In the extended canter the nose needed to be more out to allow for a better lengthening of the frame.  Zack became a bit resistant and insecure in the rhythm in passage on the centerline, as he was already anticipating the end halt. They were ninth.

The action in Hagen is going full blast with on Saturday 29 April the Nurnberger Burgpokal qualifier as well as the warm up round for the Louisdor Cup qualifier, while on Sunday the CDI Kur to Music as well as the CDI Grand Prix for Special will be ridden.