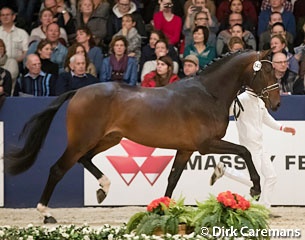 The third placed colt at the licensing, Jewel (by Ferdinand x Santano), as well as Joop TC (by Ravel x Krack C) and Jupiter (by Bon Bravour x Flemmingh) failed to impress the committee at this point and time and requested the owners to pick up their stallion. All three of them will get to try again at the 2017 KWPN testing in the autumn.

On 29 March 2017, the 4-year old Indiana Jones Plantinum (by Cupido x Special D) was rejected from the testing because of veterinary reasons. Two weeks into the testing on 24 March, two stallions had already dropped out and were referred to the autumn testing. They were Jackson STH (by Johnson x Fidertanz) and Jaqiedo (by Aqiedo x Jazz).

Seven colts from an initial 13 are still continuing their 70-day testing. They are: