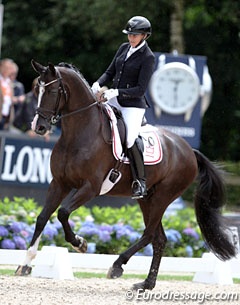 The Danish equestrian federation has created a new format for team selection for the 2017 World Championships for Young Dressage Horses to be held in Ermelo, The Netherlands, on 3 - 6 August 2017. The federation has appointed judge Gunilla Nyman Faurby, rider Dennis Fisker, mentor Birthe Lyder and team trainer Natalie zu Sayn-Wittgenstein as selectors.

A long list of combinations will be created after observation and selection trial in Vilhelmsborg on 26 May 2017. The long-listed horses will contest a final team selection competition, held during the 2017 Danish Dressage Championships in Broholm on 8 - 9 July 2017, at which both the preliminary and finals test will be ridden.

The selectors will announce the Danish team for Ermelo at the Danish Championships after the Finals test has been ridden on 9 July 2017.