Hans-Christian Matthiesen: "The Problems We Have to Face at the FEI Sports Forum" 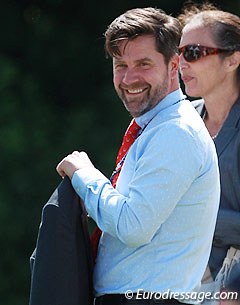 Returning guest columnist of the week is Hans-Christian Matthiesen, the new president of the International Dressage Officials Club (IDOC) and former FEI Dressage Committee Member. The Danish born veterinarian weighs in on the FEI Sports Forum which is about to discuss the future of dressage judging.

"The Problems We Have to Face at the FEI Sports Forum"

I couldn’t stop thinking about the coming weeks – and some of the problems we have to face at the Sports Forum. While watching the World Cup Finals on FEI TV – happy and proud of our colleagues doing a super job. Consistent and accurate as they are.

I know and recognize the work of the Dressage Judging Working Group but at the same time, I don’t like that they, despite the negative response from several of the stakeholder groups, national federations and top riders and trainers, still want to present the rather “old” judging system proposed by IDRC as an alternative to the current judging system during the Sports Forum in Lausanne.

I realize that it puts IDOC in a difficult position, not only because of the current judging-tendency and “perception of judging” but also because of the system in itself. It is clear that it was developed by people who do not have the practical sense and understanding of our discipline. We might look as a conservative group, that doesn’t want to ”change” and is not eager to develop the sport, but nothing is further from the truth. However, if we have to change the entire judging system, it has to be based on hard evidence that it will be for the good of the sport. The whole world will eventually have to change and adopt the new system. Many, many years of experience with the current system will be reduced to nothing. We don’t want to change the system based only on the perception of a small group of people. That is just not good enough.

Some of the things, that will come up in the presentation in Lausanne, next week:

At all time IDOC wants to help and explain our discipline. A better understanding is crucial for the further development of our sport. The work on ”simple” guidelines for judges has already been started – and in the future we have to work on guidelines for the spectators.

Revision of the FEI handbook (a group was already appointed for this job) has been postponed by the FEI, waiting for the outcome of the Sports forum. We loose a lot of time.

The working group wants to present something ”new and shiny” even though its a ”old” news based on a proposal from IDRC. It seems as an easy way to a ”quick-fix” – but it fails to take into account the huge and far reaching consequences.

The ”not so sexy” proposal – Education – is hardly mentioned! We need more support from the FEI for the further education of judges.

In the future we will have to live with the fact, that we will be analysed and evaluated. Not only in the medias, but also more ”hardcore” by organizers and the FEI. Still I have a lot of confidence and I believe in the judges and their hard work across the world.

We are well aware that we have to work (even) hard(er) to make our sport – and especially the judging – more understandable.. That’s why we want to work on Guidelines for judges (have already been started last year) and for spectators. We are happy to call it Code of points, but we also know that the only way to reduce the “human error Factor” is education. Only experience will tell you how to manage any given system.

Please, let us know of your support – we need it in these difficult times! Let your national federation and your representatives to the Sports Forum know. We are open and ready to embrace change – as long as it is realistic and beneficial for the sport.