Entertainment and Education at the 2017 World Cup Finals in Omaha 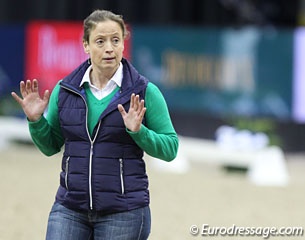 For the dressage riders at the 2017 World Cup Finals in Omaha, Nebraska (USA), Friday 31 March 2017 was an off-day for the horses in preparation of the big finale on Saturday, the Grand Prix Kur to Music. The crowds that have gathered to attend the World Cup Finals were entertained on Friday with a two-hour show programme that included several demonstration rides and an Isabell Werth masterclass.

The CenturyLink exhibition centre in Omaha is massive and Thursday's Grand Prix class was far from sold out. However, in all fairness, to fill a 18,000 capacity stadium is not an easy feat (triple the size of the Aachen dressage stadium). For the freestyle finals the lower bowl is apparently sold out and for the Friday demo classes a more than decent crowd had gathered eager to be entertained and clapping along with the rides. 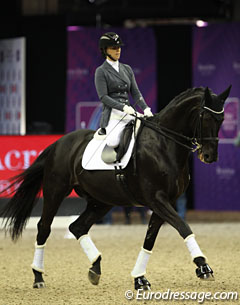 Friday's dressage entertainment session began at 15h00 with local, young musicians playing the national anthem on violin. Then two American para dressage riders, Katie Jackson (on Royal Dancer) and Annie Peavy (on Lancelot Warrior), gave a demo introducing the crowds to the discipline of dressage for riders with a disability. Renowned Western rider Lynn Palm show cased "Western Dressage" on two different horses, young rider Barbara Davis rode a freestyle on her Oldenburg mare Fiderhit OLD and other rider had a live DJ assisting her in her freestyle. Afterwards groups of volunteers entered the arena and two riders from the Midwest executed a Pas de Deux in honour of the work volunteers have done for the sport of dressage and to make the 2017 World Cup Finals a success.

Dutch based Australian Tristan Tucker provided some comic relief with his alter-ego Brett Kidding. Brett is an amateur, wanna-be Grand Prix rider who definitely needs to learn the basics of dressage. Tucker speaks into the microphone as the voice of the horse who guides his unbalanced and rider through a Grand Prix test. Tucker's display was highly amusing,but all credit needs to go to Zaffier, who was more than a forgiving horse to tolerate the weeble-wobbly Kidding in his saddle. 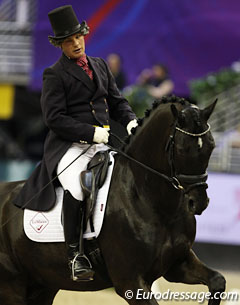 Isabell Werth's masterclass was certainly the "piece de resistance" of the day with three fabulous sessions in which she coached Canadian Karen Pavicic on the 5-year old Totem (by Totilas x Donnerhall), American Endel Ots on the 7-year old Lucky Strike (by Lord Laurie x His Highness) and American Sabine Schut-Kerry on the 8-year old Hello Halli (by Hochadel x De Niro).

Werth's display focused on "Working from young horse level to Grand Prix" and within five minutes of the first coaching session it became more than clear what her central motto was: "inside leg, outside rein". Werth first began by stating what she looks for in a good dressage horse: "three good basic gaits. OK, a 9 or 10 (gait) is hard to find, but no weaknesses," she said, adding "and good rideability." 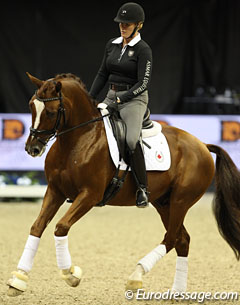 With Karen Pavicic's Totem she worked on developing a better rhythm in walk, trot and canter with "a nice contact and even reins." Within 10 minutes Totem was moving with a more consistent rhythm and improved swing all because Isabell recommended the rider to focus more on the outside rein with a driving inside leg. "Inside leg, outside rein, I can't say it enough." Werth did not allow the horse to get crooked and told the rider time and again to ride shoulder-in on the long and short side, even on the circles. "Always think shoulder-in. There can be no interruptions in the rhythm," she stressed. "A good contact comes from behind. You need a good rhythm so you get a nice, clear swing."

Werth spoke with an animated voice and worked enthusiastically with the riders. She encouraged them to be mentally sharp on the horse and quick with the aids. She wanted swift responses from the horses and Isabell continuously shouted "tak tak" in the microphone to spur on the riders, at the same time evoking what a bright rider she is herself, straight away spotting the problems and how she would fix them. 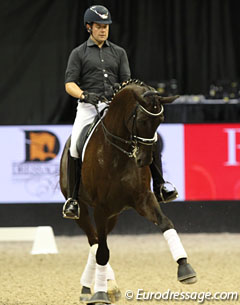 Endel Ots' Lucky Strike is a very impressive, powerful horse but Werth wanted him to be less passagey today and quicker and more natural in his tempo, especially in trot. She worked long on getting smoother half passes with improved bending. "He has a nice long swing, but today the goal is to build him more towards Grand Prix," said Isabell about the horse. "For Grand Prix in the daily work we need to make him quicker; smaller steps and more bending, but still in front of you." Werth was very focused and committed to improving this horse and corrected the rider on his seat in the half passes as well as advised him to have a more elastic inside rein that doesn't block, but allows the horse to move more freely. The announcer tried to short-cut this ride by notifying Isabell she had reached the deadline, but the German Olympian kept on working as felt she had not yet reached her target for the day. She kept giving tips until Endel had Lucky Strike more naturally swinging and active from behind. "He needs to be more free in the back, but this is a question of months and years, not just 10 minutes here," she stated.

Even while working with a young developing Prix St Georges horse, Werth went back to the basics as that is where all problems are fixed. The walk was equally important, by regulating the rhythm, relaxation and length of the neck. When a horse needs to get a break, the long rein shouldn't just be given freely, but the horse needs to gradually stretch into the contact. The proper length of the neck also benefits the quality of the walk. "Don't start the canter unless the walk is good," she remarked. "This is a mental thing (for the riders)." 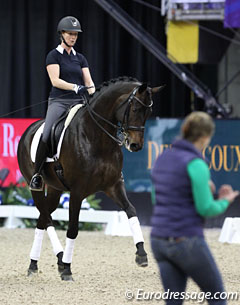 Sabine Schut-Kery's mare was quite impressed by the surroundings and swung her tail a lot. Within seconds Werth said that the mission of the day was "to bring the croup lower and open up and lift up the shoulder." Isabell wanted the mare with a quicker hindleg and more swing. And she went back to the basics: inside leg, outside rein. The mare needed to have more flexion and rhythm in trot with two "steady reins." Isabell worked on lengthening the jump in canter. The tempi changes were stocky, which was because she "lacked connection on both reins between the changes." Isabell told her to ride more forward in them. Typical Werth style, she instructed the rider to play with the horse and asked Sabine to do some one tempi changes, which the horse had never done before. Schut-Kery did two times a perfect "one-two" on Hello Halli at the 2017 World Cup Finals in Omaha. The pair finished their ride with some passage work and piaffe steps. "Slowly bring her into the rhythm, she has to find it herself," said Isabell.

It was a pity that the announcer ended the Werth masterclass as everyone in the audience, including Isabell herself, had appetite for more. You can see a video of Friday's demonstrations on the Omaha Facebook page (sound is good, but footage is too far away).