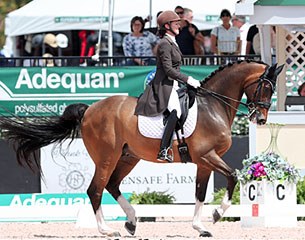 “It was one of those ‘let’s just give it a whirl’ moments,” said Rizvi, “I’ve just been doing the freestyle, but it was time to do the Special, and I’m so proud of him. He felt forward, and with the length of the test it felt like even at the end, I still had a lot of horse under me. I’m just so amazed; he’s like 16 going on six and is such a joy to ride.”

In regard to her future with “Edward”, Rizvi commented, “I think we are going to try to go to Europe this summer. He is super healthy, and I think that now is the time that we want to move forward and try to show this summer instead of waiting for a whole year until next season.”

Katie Poag and her own Zonnekoning, a 2004 Dutch Warmblood stallion (by Florett As) captured a victory in the Grand Prix Special CDI 4*. Their score was 67.941%. 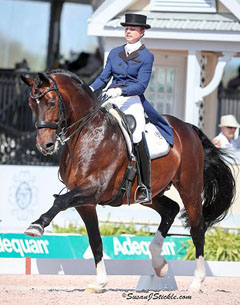 “I thought the ride went pretty well,” said Poag. “I thought the trot work was the strongest part of it, as it usually is. The canter is still a bit challenging, (and) our flying changes are coming along. I was pleased with the overall feeling of the ride. Our goal is to keep climbing and moving up, and I think he has a tremendous amount of talent and can continue to do that. It’s just a matter of coming to these competitions and getting more experience. I’m very excited about the future and how much more I think he can bring to the table.”

Earlier in the day, Jennifer Baumert (USA) and Handsome, a 2005 Hanoverian gelding (by Hochadel x Weltmeyer) owned by Elizabeth Juliano, earned a score of 74.875% and a victory in the Intermediaire I Freestyle CDI 3*. Second place went to Catherine Malone (USA) and Dilona, a 2008 KWPN mare (by Lord Leatherdale x Kennedy) owned by Iron Spring Farm, with 73.458%. Third place was awarded to Anna Marek and Einstein JP, a 2009 KWPN gelding owned by Lorna Donahue, scoring 71.750%.