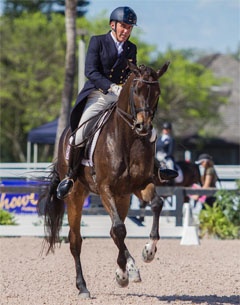 Multiple high scores and first place titles have been the norm this winter show season in Wellington, Florida, for the Piaffe Performance Farm team of dressage riders. Led by founder and owner Dr. Cesar Parra, the Piaffe Performance team is known for its consistent record of excellence, and accumulating a wealth of blue ribbons at this year’s Global Dressage Festival only further confirms that Piaffe Performance is a force to be reckoned with.

Parra’s team of international riders are showing their skill in the saddle and experience under pressure, and the spectacular horses they are campaigning have demonstrated that they are on top of their game.

Parra, a 2011 U.S. Pan American Games Dressage Team Gold medalist, is racking up the blues aboard the eight-year-old Westphalian mare Belle Ami (Belissimo M x Reebook). During the first week of the Adequan Global Dressage Festival, which began on January 11, 2017, Parra earned two scores over 70 percent, securing a first place in the USEF Developing Prix St. Georges class. He and the bay mare were again unstoppable in the third week, topping the leader board with two more wins in the same division. The pair placed second in the FEI Prix St. Georges during the fifth week, and capped the seventh week with another first place in the USEF Developing Prix St. Georges, along with a high score of 74.412 percent. Belle Ami is owned by Parra, Brooke Centrella, and George Feldman.

Don Cesar, the seven-year-old chestnut Westphalian gelding (Desperados x Manhattan) owned by Parra’s wife Marcela Ortiz, is showing remarkable progress. Parra wowed the judges with multiple scores in the high 70’s in the FEI Young Horse 7-Year-Old division. He garnered three first place ribbons during competition in the fifth and seventh weeks of the series, posting a high score of 77.910 percent. He then rode away as winner of the FEI Young Horse 7-year-old final.

Katie Riley, who joined Cesar Parra’s team in 2000, is one of the founding members of Piaffe Performance Farm. She is an accomplished Grand Prix rider and USDF Bronze, Silver, and Gold medalist. Riley and Sir Beckmann, an up-and-coming five-year-old bay Hanoverian gelding, won the FEI Young Horse Final for 5-year-olds with a 76.000 percent. Owned by Parra, Sir Beckmann (Sir Donnerhall x St Pr Witchita) is quickly mastering skills, with a promising dressage career ahead of him.

Twenty-seven-year-old Piaffe Performance rider Roberto Brasil joined the team in 2014. Originally from Portugal, Brasil is an 11-time Azores Dressage Champion and a Portugese Cup Silver and Bronze medalist. He and Whoopie Gold, a 13-year-old chestnut Oldenburg mare (Wolkentanz II x Romancier) opened the first week of the show season by winning both of their FEI Intermediate II classes with a high score of 68.289 percent. 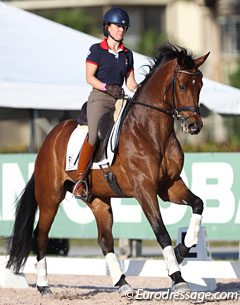 Not to be outdone, Merita Hagren partnered with the Dutch Warmblood Amigo to win two Fourth Level tests. Amigo (Turbo Magic x Jammy) is a grey, 12-year-old gelding owned by Parra’s student Martin Sosnoff. Hagren also rode two Fourth Level tests aboard Don Cesar during the third week of the season, earning a high score of 71.216 percent and placing third in both classes. Originally from Finland, Hagren has been with Piaffe Performance for three years. With extensive experience training various breeds, she specializes in riding young horses and training them up the levels in dressage.

Throughout the season, Piaffe Performance Farm has consistently supported not only its own riders but also successful adult amateur competitors at the Adequan Global Dressage Festival. Piaffe Performance is presenting the Piaffe Performance Adult Amateur Achievement Award to honor riders who contribute to the sport of dressage through sincere sportsmanship and high-quality horsemanship. The award will be presented throughout the competition series, which concludes on March 25, 2017.

Piaffe Performance produces horses and riders that have earned numerous prestigious accolades both nationally and internationally. Now decorated by this year’s high scores, ribbons, and awards, Piaffe Performance is excited to continue its winning ways throughout the remainder of the season and then the spring and summer months. Dr. Parra and his team – with locations in Jupiter, Florida, and Whitehouse Station, New Jersey – invite riders to learn more about training and lessons by following the Piaffe Performance official Facebook page or visiting www.Piaffe-Performance.com.