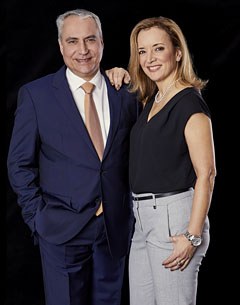 The Fédération Equestre Internationale (FEI) today signed a pledge to become a member of the International Gender Champions Network in Geneva, an initiative committed to working towards gender parity in sport and organisations.

FEI President Ingmar De Vos joined the heads of four other sporting bodies - the IOC, World Archery, the International Hockey Federation and the International University Sports Federation – to take the panel parity pledge and become an International Gender Champion, confirming a commitment to work towards gender parity in their organisations.

International Gender Champions is a leadership network that brings together female and male decision-makers to break down gender barriers. Since its launch in Geneva in 2015, more than 120 leaders from the diplomatic and international communities and the private sector have taken the panel parity pledge. See www.genderchampions.com for more information.

Equestrian sport has always been at the forefront of gender equality, and is the only sport in the Olympic movement in which men and women compete together in the same competitions from grassroots up to elite level.

“Strict parity between men and women is at the heart of equestrian sport where male and female athletes compete as equals at all levels”, the FEI President said. “The FEI is proud to champion the many female athletes, officials, trainers, veterinarians, grooms, administrators, and staff who are a vital part of our diverse multicultural community. Their talent, resourcefulness, and hard work contribute immensely to its constant growth and deserve our full support.”

As part of the International Women’s Day celebrations in Geneva and its commitment to the International Geneva Gender Champions network, the FEI today made two individual pledges at the Palais des Nations, headquarters of the United Nations in Geneva. The FEI will offer male employees a one-month paid paternity leave following the birth of each child contributing to an improved work life balance and also made a commitment to increase female membership in FEI Committees.

“Gender equality in sports has always been an important issue, not only from the perspective of female athletes, but also women in top level positions in sport”, FEI Secretary General Sabrina Ibáñez said. “Although gender equality has come a long way in the world of sport, at the FEI we are constantly looking at ways to improve. There should be no disparity in sports nor in the workplace. Women and men should be seen as, and treated as, equals in all respects,”

“Gender equality on the field of play is one of the key assets of our sport and a value we are very proud of. The FEI has supported women in top leadership positions and we have had a number of female Presidents leading the organisation in the past. When I was appointed as the FEI’s first female Secretary General in 2014 it was a real honour and sends out a strong signal that gender equality in the workplace is not only important, but is exemplified within the ethos of the FEI.”

With the second IF Women in Leadership Forum, organised by the Association of Summer Olympic International Federations (ASOIF), also taking place this week in Lausanne, the FEI is proud to be part of the movement highlighting the talents of women in leadership positions and empowering women in sport.