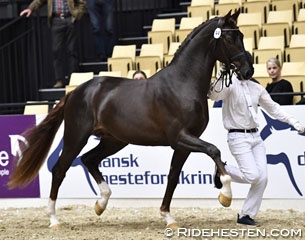 Fredensdal Fifty Cent became the favourite colt of the 2017 Danish warmblood Stallion Licensing in Herning, Denmark, on 8 - 12 March 2017, where 18 dressage colts were approved and 5 were named premium stallion.

While these two stallion moguls battled it for greatness, it was Nathalie zu Sayn-Wittgenstein who ran away with the spotlight as her one colt, Fredensdal Fifty Cent, was the absolute favourite of the week. Fifty Cent is bred by Linda Falensteen and Martin Strande out of dam Geisha (by Donnerball x Michelangelo). Grand dam Ginger produced the licensed Danish stallion Gagarin as well as the 2016 North American and U.S. Junior Riders Champion Greystoke. Zu Sayn-Wittgenstein bought Fifty Cent as a foal at the Danish elite auction for 20.135 euro and sold to horse to Blue Hors last September under the condition that he was approved for breeding.

Forty-four dressage bred stallions were presented for licensing and 18 received a positive verdict and may proceed to the 10-days Stallion Performance Testing, which is mandatory before they can start breeding. In the autumn the colts will also have to do a 35-day testing.

Not approved in Denmark but still licensed in Germany were Trakehner stallion His Moment (by Millennium), Oldenburg premium stallion Antheros (by Ampere) and South German approved Spotify (by Sezuan x Hotline).