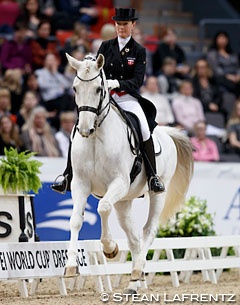 Danish Mai Tofte Olesen and her grey gelding Rustique have been the surprise pair on this year's Western European League World Cup circuit with strong performances throughout. For the final qualifier in Den Bosch, however, Olesen decided to scratch as her chances were slim for raking in enough points to qualify directly for the 2017 World Cup Finals in Omaha. Yet, hope is still there.

"I decided not to go because I have been competing in Augustowek, Odense, London, Amsterdam and Gothenburg. I have a 4th, an 8th, a 10th, a 12th and a 7th place. The 12th place in Amsterdam does not count. Therefore I had to become number 9 or better in Den Bosch to improve the 10th place from London. I don't think that's possible," Tofte Olesen told Eurodressage.

Olesen's Rustique is a 15-year old Danish warmblood gelding by Heslegards Rubin x Midt West Ibi Light. The duo made its international CDI debut less than a year ago in May 2016 in Aalborg and they have been consistently competing at CDI's in Yapaja, Falsterbo, Augustowek, Darmstadt, Odense, Randbol, Stockholm, London, Amsterdam and Gothenburg since then. 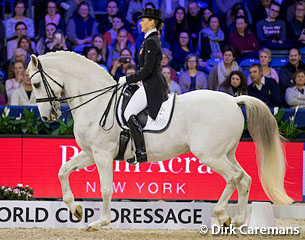 "I only have one horse and I hope that Rustique will be in competition for at least four more years," Olesen explained. "He is very strong and healthy and there is so much more in him, than we have shown until now. I want to take very good care of him and I thought it would be waste of his horse energy to go and not really have a chance to improve our result."

Olesen's chances for a ticket to the World Cup Final depend on where riders such as Borja Carrascosa and Edward Gal will finish in Den Bosch and whether Tinne Vilhelmson will go to Omaha. 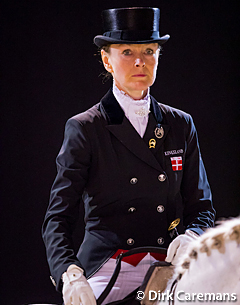 "I stay at home, hoping to be lucky," Mai admitted. "I'll cross my fingers, toes, arms and legs on Saturday. I'm hoping so much that it will be possible for us to go. To ride in the World Cup Final is one of my biggest dreams."

The 49-year old Olesen trains with Anne Grethe Tornblad. "Rus is so fresh, so we are ready to go, if we get the possibility," Mai added.