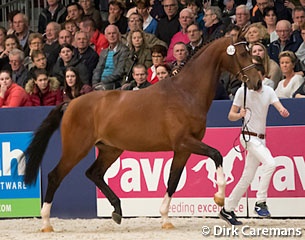 Thirteen 3-year old stallions have been entered to participate in the 2017 KWPN Spring Stallion Performance Testing which is scheduled to begin on Monda 13 March 2017 in Ermelo, The Netherlands.

Thirteen 3-year old colts are entered for the 70-day testing and in addition to that, five 4-year old stallions will also be doing the 50-day testing following an assessment under saddle on 13 March.

Initially ten 3-year olds were registered, but a late submission of an extra three youngsters followed just a few days after the publication of the first starters' list. Furthermore, three 4-year olds were  first entered, but then one dropped out (Idool N, by Bordeux x Jazz) and then two extra were added to the definitive list.

The colts entered for the spring testing are: