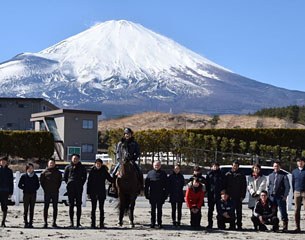 As senior manager of the Japanese dressage team, German dressage trainer Jurgen Koschel travelled to Japan for his third master class at the Gotemba equestrian sport centre, where he coached and helped around 18 riders with their training and test riding. Japan is to host the 2020 Olympic Games and the stakes are high for the home country to be well prepared.

The Jurgen Koschel Master Class took place on 21 - 26 February 2017 and 12 senior riders and 6 junior and young riders attended the three-day clinic. This was Koschel's third time in Gotemba. He also did one major masterclass in 2015 and one in 2016.

While Koschel was there for five day, the senior riders got an immersion training course for four days, while the youth riders got two days with the German trainer. Some practised their test riding, but not all. The riding level ranged from Fourth level and Prix St Georges to Grand Prix. Also the experience level of the riders differed immensely: some were routinier Grand Prix riders with international experiences, other only had done a few national shows in Japan.

One of the riders attending was Yoshie Ota on the off-the-racetrack Thoroughbred Pace, which she has been training for the past 10 years from novice level to Grand Prix. Japan's national Grand Prix champion Singo Hayashi saddled Campos and Manolete, while his former competition ride Ramses der II was presented by Toshiya Kawabata. 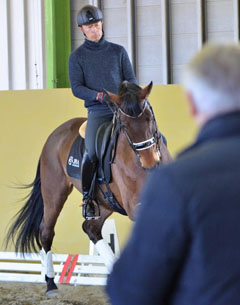 With the 2020 Olympic Games being hosted in Tokyo, Japan, the stakes are high for Japan's dressage riders to do well. The sport already got a major boost when Japan qualified a team for the Rio Olympics, which led to numerous riders investing in Grand Prix schoolmasters late 2015. Koschel hopes that for 2020 they will prepare sooner, not only with older horses but also younger ones.

Koschel stressed that the Japanese riders need to get more mileage and exposure to international judges, so they become recognizable faces and are no longer strangers in the field.

"At the beginning the Japanese riders went abroad and competed international, but they were not known by the judges," said Koschel. "It’s pity, but it’s normal. They have to compete at many more internationals, so they climbd the world ranking. They can only achieve that at CDI's. We need to have the judges sit up straight and say, 'I have to watch them and I have to concentrate'. Last year several Japanese riders competed internationally and I think they have to continue that."

Koschel hopes that Japan will not only buy schoolmasters last minute, but also invest in talented young horses which they can show and improve the next three years. 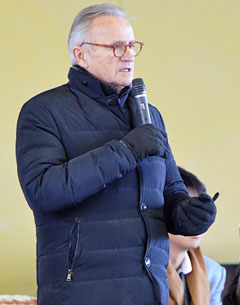 "The riders have the talent, they are good enough, but we need good younger horses for the future," Koschel explained. "This is our goal for the next four years. It is not enough to buy one year before Olympic Games, we need to do that now, because the rider and the horse have to go up in the world ranking as a combination. They have to get known by the international Judges. They have to compete this year, the next year and the year after."