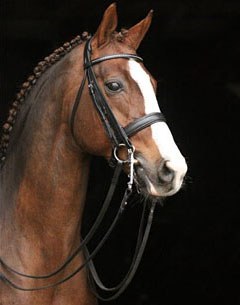 The Celle State Stud is clearing out its stock. After selling Rascalino and Dannebrog overseas, the Hanoverian licensed stallion Royal Blend is following in their wake. The 16-year old stallion has been sold to Canada.

Royal Blend is a 2001 born Hanoverian bred by Reinhard Grothmann and previously owned by the Celle state stud. He is by Rotspon out of Lena (by Lauries Crusador xx x Grande x Duellant).

He was first approved at the 2003 Hanoverian Stallion Licensing in Verden and did the 300-day stallion performance testing in Adelheidsdorf in 2004. He scored a total of 131.61 points to finish second out of 42 participating stallions. He earned 137.31 points for dressage and 107.19 for show jumping.

The stallion has been competed his entire life by Susanne Ersil. She first started him in January 2005 in the riding horse tests and won the 2005 Hanoverian Young Horse Championships. At the 2005 Bundeschampionate he became reserve champion. In 2008 he competed at the World Young Horse Championships and landed 12th place. At the Bundeschampionate four weeks later he was 21st in the second round.  At age 10 the stallion moved up to S-level and stuck to small tour level with his last show being in October 2012.

In his 12 years standing at stud he has sired 5 licensed sons (Rocket Man, Rosano, Royal Bolero V, Royal Spirit, and Royal Merlot (gelded)) and 29 state premium mares in Germany, so far. A few of his offspring are competing at national S-level in Germany, while Michael Klimke's Grand Prix horse Royal Dancer is probably the only Royal Blend offspring successfully competing at CDI's.

Royal Blend has been sold to Markus Wüthrich of Sigma Warmbloods in January and the stallion arrived at Klondike Victory Farm at Sylvan Lake, AB, Canada, in February for quarantine. He will be available for live coverage.