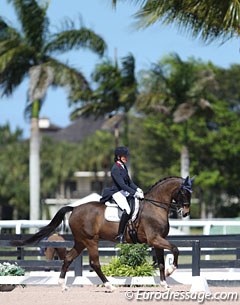 My annual trip to Wellington for the CDI 5* was an exciting one probably because we enjoyed the most brilliant weather I've ever experienced in Florida. Blue skies, sunshine, not too hot, not too cold, each day, for 10 days. Although the 5* is normally the highlight of the Florida season, this year the starters' field felt skinny and it was obvious that 2017 is a lull year for American dressage with no summer championship on the table.

While it was great to see three U.S. Olympic team riders go head to head in the 5* big tour classes, the most interesting action of the week was in fact taking place in the national classes. Held behind the main stadium with a gorgeous backdrop of palm trees and lush green grass, the national show ring is the most beautiful to photograph of all rings in Wellington. The renowned Friday Freestyle Night in the CDI ring is usually where the magic happens, but this year only six 5* combinations contested the kur in front of a sell out crowd. The lack of excitement in the main stadium was well made up behind the scene throughout the week. 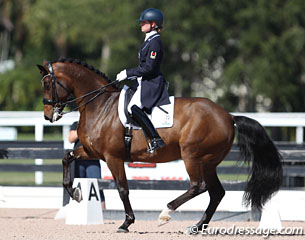 There were tons of interesting stars in the making in the national arena. Canadian Tina Irwin rode her 11-year old  Oldenburg mare Fancy That (by Donnerschwee x Freiherr) in the horse's first Grand Prix classes and the lightfooted mare showed incredible potential in piaffe and passage. Adrienne Lyle presented Kylee Lourie's tall 9-year grey Dutch warmblood gelding Harmony's Duvall in the small tour, but it was in fact in the warm up ring, where the powerhouse was showing some first Grand Prix work that he really impressed. Cesar Parra also brought along his new Grand Prix ride, Darius Rubin, which his sponsor Khamel Ghribi acquired from the Kottas-Heldenberg family in Austria; The long-legged chestnut gelding is a stunner with his very elegant movements. British Susan Pape-Draper rode the black Hanoverian Scuderia (by Sir Donnerhall I x Escudo I x Matcho AA) at third level, but the highly talented mover did not display the best rideability and reared twice, even though Pape was able to show off some good work on the now gelded, former licensed stallion. 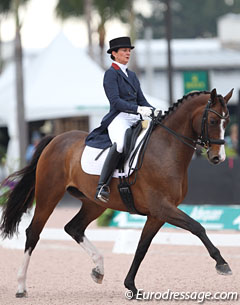 In the international small tour I was quite puzzled about the Prix St Georges victory. Steffen Peters brought Bailarino (by Breitling) over from California. The intersting chestnut has a very nice side silhouette with much shoulder freedom, but the horse looked lazy, was constantly bent to the left and dropped the tongue out of the mouth. No problem for the judges and the victory went to Bailarino. Adrienne Lyle's 2016 U.S. Developing PSG champion Horizon (by Hotline) was a very intriguing horse to watch with much talent for the future, but in my opinion the small tour star of the weekend was Jane Cleveland's Danish mare Monique (by Temptation). The bay mare was so correct in her execution of the movements, active, forward and with scope. She might have shown more stretch and swing in the topline overall, but she produced the best quality work of all Prix St. Georges horses. Of course Susanne Hamilton's Haflinger gelding Lutz needs mentioning. He definitely captured the hearts of the crowds. The apple-bottom Halfinger came across surprisingly athletic and although he hardly showed any collection in the movements, he did produce some of the best half pirouettes that weekend. 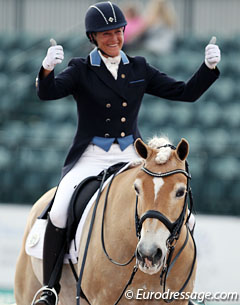 Wellington is Disney Land for horse lovers. On the one hand there is a strong sense of community with a tight social network and lots of dinner dates and social gatherings happening each evening; on the other the wining and dining can be exhilarating but also incredibly tiring. That is why, for Euro-realists, Wellington is best digested in small doses. My mother always says that the good stuff in life has to be savoured like a Belgian praline: just a few bites of chocolate heaven.. and that's it! Almost sounds like a Forrest Gump wisdom.

The older a person gets, the more weather sensitive s/he seems to become; or at least it is in my case. The fact that you just feel great in your skin in Florida just lifts your spirit and makes the horse show double pleasure. Cruising down the big lanes in the polo club, watching people live a fit, active lifestyle combined with horses are an inspiration. I'll be back next year and hope it will be as much fun at the new venue in the International Polo Club. Count me in!