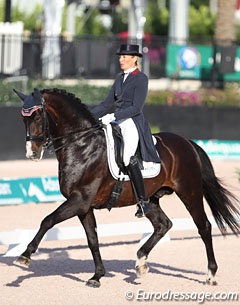 Charlotte Jorst and her Dutch warmblood stallion Nintendo became the winners of the 3* Grand Prix class on the opening day of competition, Wednesday 8 February 2017, week five of the 2017 Global Dressage Festival in Wellington, Florida. On Thursday the prestigious 5* Grand Prix class will take place in the afternoon and three members of America's Rio Olympic team will compete against each other for the first time.

The action in Wellington kicked off at 9 AM on Wednesday morning with the horse inspection in which no less than five horses were sent to the holding box and eventually two were held for re-inspection on Thursday morning.

At noon the 3* Grand Prix began and twenty-seven combinations presented themselves to the panel of international judges including Cara Whitham, Irina Maknami, Hans-Christian Matthiesen, Stephen Clarke and Mike Osinski.

Clinching the victory was Charlotte Jorst aboard her 14-year old KWPN stallion Nintendo (by Negro x Monaco) with a score of 71.300 %. While the trot extensions were still hasty and lacked serious ground cover, Nintendo showed great improvement in very confirmed passage work and small pirouettes. The trot half passes were nice, but the rider struggled with the flying change at the end of the extended canter. The extended walk could gain more ground cover and the collected was quite short, but overall Jorst produced a very consistent round that well earned the score. 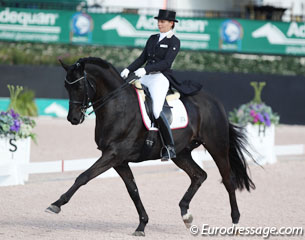 Commenting on her ride, Jorst said, "Nintendo just felt so good today. Even in the warm-up he felt so together, and so ready to go. I think that having had a little bit of a break (last weekend) was really nice for him. He was just ready, and I thought we had a really nice test. I don't actually know what I'm going to do yet," said Jorst of her freestyle test that she and Nintendo will perform on Friday. "I have new music that I was going to ride through, but I just got it this morning. I'm torn as to whether or not I should do that. It has a little bit of a higher degree of difficulty and a much more fun floor plan for me. I don't know if I will do that, or stick with my old music. It's completely up in the air!"

Placing second was British Susan Pape and Leslie Malone's 10-year old Hanoverian licensed stallion Don Noblesse (by Dancier x Don Davidoff ) with a 70.880 %. The lovely black stallion showed good energy in the trot work and textbook halts. The piaffe was sweet, the passage lightfooted although there often was more left hindleg activity. The second piaffe travelled too much forward and was one step croup high. There was a mistake in the one tempi changes and the zig zag lacked elasticity and bending to the right, but overall Pape gave a very nice presentation with a horse quiet in the contact. 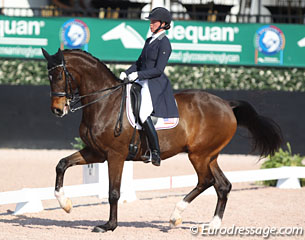 Third place was awarded to Dawn White-O'Connor (USA) on Akiko Yamazaki's 15-year old Westfalian gelding Legolas (by Laomedon x Florenstan II) with 70.560 %. There was high anticipation about this brand new duo as they appeared for the first time in front of the Florida crowds. Dawn had the bay gelding well on her aids, but there still needed to be some more fine tuning. The trot half passes had much crossing of the leg, but the regularity was not always there, something also obvious in the trot extensions. The passage and especially the transitions into piaffe, however, were the some of the best shown in the Grand Prix. There was an early strike off to canter from passage and mistakes in both the two and one tempi changes (score 5.5 - 7.0). The pirouettes were small, but the exit in the right one was sloppy. It is visible that this green combination is still getting to know each other, but the talent and promise are there. 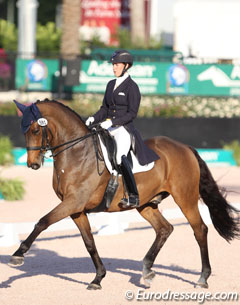 Olivia Lagoy-Weltz is now in her second year at Grand Prix level aboard her 13-year old Danish warmblood Rassing's Lonoir (by De Noir) and the bay gelding has shown tremendous progress. The much more muscled gelding was still quite hasty in the extensions and the temp changes need straightening out, but the piaffe had very good potential and the passage was bouncy with a very nice side silhouette. Lagoy-Weltz trained her Danish gelding with Lars Petersen during their success years at small tour level and the pair is now being coached by Debbie McDonald. They scored 70.280% for fourth place.

Canadian Olympian Megan Lane rode her rising Grand Prix horse, the 11-year old Westfalian gelding San d'Or (by Sandro Hit x Cocktail) in the 3* and finished fifth with 69.780%. The refined bay has a very lightfooted passage but needs to move the hindlegs more under the body. The extended canter lacked some stretch in the frame and the right pirouette needed more bending, but the tempi changes were very forward yet solid. 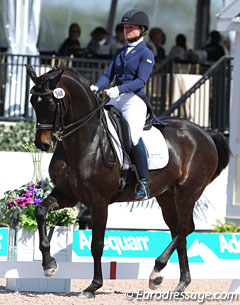 After a year and a half break from competition, Devon Kane was able to make her come back on the 14-year old Danish bred Destiny (by Diamond Hit). The highly talented dark bay gelding was the first to go in the class and was still quite tense throughout, grinding his teeth, but Kane did a very good job steering the horse smoothly from one movement into the other. The trot extensions lacked regularity, but overall it was obvious that Destiny is a high quality Grand Prix horses that appeared ring rusty. They scored 68.920% for sixth place.

Another come back kid was Leah Wilson, who had to put her 2016 Olympic ambitions on hold because of a pregnancy. After more than a one-year break from CDI competition, Wilson returned aboard the now 18-year old Hanoverian gelding Fabian JS (by Feiner Graf), who certainly defies his age. There was lots of bounce in the piaffe and passage with the piaffe being in excellent rhythm, even though the balance could still be better. The transitions in and out were wonderful though. The trot extensions were not the greatest and the one tempi changes did not cover much ground, but overall it was a well ridden test which generated a modest 66.720% on the board. 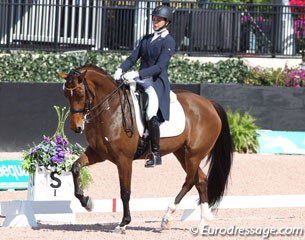 Last year the 27-year old American Anna Marek impressed with her riding skills aboard the compact pocket rocket Unico G (who disappeared from the CDI scene in April 2016) and this year, the gifted rider brought along the 9-year old Dutch mare Dee Clair (by Sir Sinclair). Marek's mount is not really the show stopper: small, naturally on the forehand (like many Sir Sinclair offspring) and very poneyesque, but it is worth mentioning that this rider had her bright bay horse very light in the contact and presented her in a sympathetic way. She rode a lovely passage out of her, although the piaffe was very unsettled and wide behind.