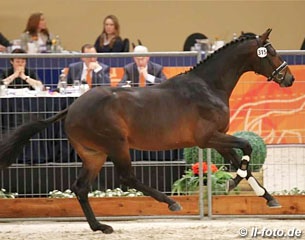 Twenty-one dressage bred colts have been accepted to participate in the 2017 KWPN stallion performance testing following a positive verdict on dressage day at the 2017 KWPN Stallion Licensing in 's Hertogenbosch, The Netherlands, on Friday 3 February 2017.

The 2017 KWPN Stallion Licensing kicked off with two assessment days of the jumper colts. On Friday and Saturday the spotlight is on dressage. Fifty-one stallions were presented for the second phase and the licensing committee, chaired by Bert Rutten, gave a positive verdict to twenty-one colts.

"We saw a collection of good stallions today," said Rutten. "Stallions which were able to convince with their conformation, movement and good pedigree. Also when it comes to diversity in blood we have given interesting stallions the opportunity to prove themselves in the performance testing."

Four of them are invited for the "champion's ring" which is called "premium ring" in Germany. The licensing champion will be named on Saturday folllowed by the auction of licensed and non-licensed stallions. 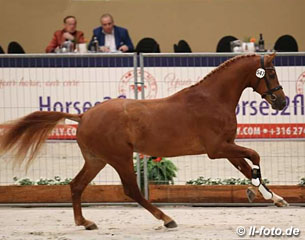 Two striking colts, which stood out with their movements, were not accepted for the testing because of deficiencies in their pedigree: one because of the unproven dam line Jetlag (by Fellini x Florencio), another because of in-breeding Jack Sparrow (by Expression x Vivaldi).

Two sires shared the best turn-out of colts with no less than three of his crop accepted for the performance testing. They were the Hanoverian De Niro (by Donnerhall x Akzent II) and the KWPN bred Ferdeaux (by Bordeaux x Ferro). Stallion owner Joop van Uytert saw no less than 5 of his stallions accepted.

The 21 colts accepted for the testing are: