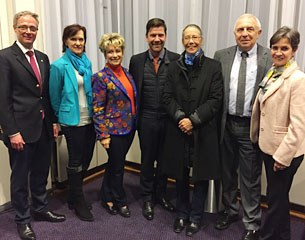 At the 2017 General Assembly of the International Dressage Officials Club, Danish judge Hans-Chrisitian Matthiesen has been voted the new president of IDOC. At the subsequent FEI 5* judges meeting British judge Stephen Clarke has been re-elected FEI Judge General.

The 2017 IDOC General Assembly took place during the 2017 CDI-W Amsterdam and included an official board meeting, educational seminars, and the general assembly.  The board meeting was held on 26 January, where topics such as the continuing education and support of its members via regional seminars were planned and discussed. The FEI held a FEI 5* dressage judges meeting right after the IDOC GA.

Stephen Clarke's 4-year mandate as IDOC president came to an end and he is succeeded by Hans-Christian Matthiesen, who won the election. Clarke was re-eleced as the FEI Judge General at the *5 judges meeting.

"Stephen has fought for judges' pay and working conditions and has led the judges with remarkable humor, knowledge and common sense," said IDOC board member Janet Foy. "His logical approach to our sport was always appreciated."

The International Dressage Officials Club (IDOC) stems from the International Dressage Judges Club (IDJC) and was founded in 1990. Amongst its goals, IDOC aims for the promotion of the principles of horsemanship, more particularly of the schooling according to the basic rules of classic equitation; the maintenance of an independent position of the dressage judges as well as an impartial exercise of the judgment activities; and the cooperation with international equestrian associations and other associations in matters which pertain to the judgment of dressage training.