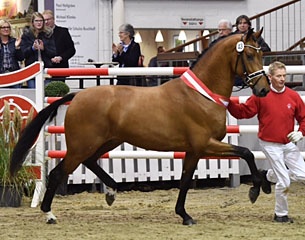 The Westfalian licensing champion Valverde will not be appearing in the second phase of the 2017 KWPN Stallion Licensing, which will take place in 's Hertogenbosch, The Netherlands, on 1 - 4 February 2017.

The Westfalian bred Valverde (by Vitalis x Ampere) was proclaimed champion of the Westfalian licensing in Munster in November. He is owned by Eugene Reesink in partnership with Andreas Helgstrand and Cathrine Rasmussen.

The bay stallion also successfully participated in the first phase of the KWPN licensing in December and was invited to the second phase in February. However, Reesink told Dutch equestrian magazine Horses.nl that Valverde will not be appearing in Den Bosch.

"He's already breeding big time in Germany and is probably also going to the Danish licensing. The KWPN licensing is just a bit too much," Reesink told  Horses.nl. "The German breeders already begun their breedings in January and in December we already froze his semen. We believe it is unwise to put such a young stallion in the lorry for another two days to go from Denmark to Den Bosch and do the entire circut here."

Valverde has not yet completed his Stallion Performance Test nor Suitability test in Germany, which is mandatory to be fully licensed for breeding in Germany.