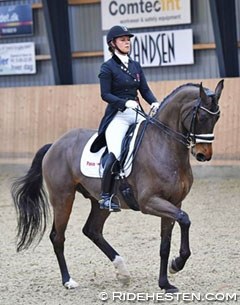 "I'm really happy with our debut. He still needs a lot of strength, but I have big expectations of him. He has improved a lot the last six months and I really love his temperament," Kasprzak told Eurodressage. "We will do a few more national shows and see how he will develop. I don't want to rush anything with him."

For Kasprzak, Rock Star will be her big tour ride for the future. Her number one Grand Prix horse Donnperignon (by Donnerhall x Matador) turns 18 in 2017 but Anna has no retirement plans for him.

"Pepe is still fit and happy, and as long he is like that we will continue," she said. "He loves competition and I know he will be sad when he doesn't get full attention anymore. But of course he will not go for 5 more years."

Anna's second Grand Prix horse, the 13-year old Danish warmblood Honnerups Driver (by Romanov x Don Schufro), has been having a hard time finding his stride  at international Grand Prix level. Driver made his international Grand Prix debut in October 2014 and only competed in one CDI in 2015 and two in 2016. Their last CDI was the CDI Herning in March 2016. Kasprzak acknowledged that the tall liver chestnut is not a good traveller, feeling out of place in stalls other than his own at home.

"Driver is doing fine in training and I hope we can do some shows again this year," Anna explained. "We have had some psychological challenges with him at shows that we have worked at lot on. He has been really stressed, especially in the stables at shows so it was important for me to find out how to manage him when he is like that before we go out to really big shows."