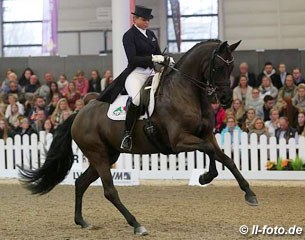 Dorothee Schneider and her 2016 Louisdor Cup winner Sammy Davis Jr made a smooth transition to the senior Grand Prix division and took out their first victory of the 2017 show year in the Grand Prix at the 2017 CDN Munster Indoor on Saturday noon 14 January 2017. Eighteen horses contested this national class in which riders are allowed to carry a whip.

The judges officiating in this Grand Prix for Special were Hans-Peter Schmutz, Klaus Storbeck, Ute von Platen, Harry Lorenz and Michael Settertobulte.They were in good spirits, generously scoring the big name riders despite mistakes. Nothing has changed in wonderworld.

Dorothee Schneider and Matthias Herbert's 11-year old Sammy Davis Jr (by San Remo x Wenckstern) fulfilled their role of Germany's top developing GP pair and were placed first unanimously by the panel of judges with a whopping 75.600%. Schneider showed off her excellent training of Sammy Davis Jr. The black gelding thinks with the rider but overall the horse often gets too long in the frame with the hindlegs out. In the trot extension he achieves massive ground covering but the hind legs rotate like a windmill behind the body. It would have been nice to see the horse more ability to stretch and compress the body between the extended and collected work. 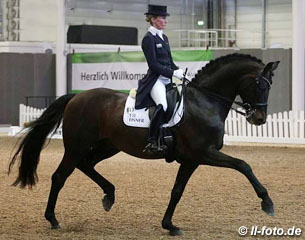 Helen Langehanenberg and Louise Leatherdale's 15-year old Hanoverian stallion Damsey (by Dressage Royal x Ritual) finished second with a solid round that earned them 73.200%. The dark bay licensed stallion has a nice silhouette in piaffe and passage, but in the first piaffe he needs to be quicker in the rhythm and off the ground. In the second he travelled forward. The balanced zig zag was a highlight in the test as well as the big one tempi changes. The horse lost the rhythm in the final passage before the halt.

Anabel Balkenhol and Gestut Webeslgrund's 10-year old Trakehner stallion Heuberger TSF (by Imperio x Michelangelo) is presented in a very lovely uphill frame, with much self carriage throughout the test. The dark bay stallion has now reached an age where the piaffes should definitely be more on the spot though. However the tempi changes were great. 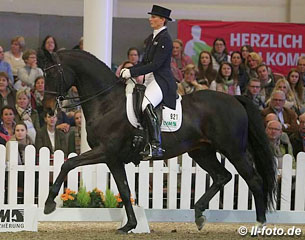 Beatrice Buchwald and countess Amely von Buchholtz's 16-yearold Westfalian gelding Daily Pleasure (by De Niro x Ehrenmarsch) landed fourth place with 71.200%. After some miscommunication at the 2016 CDI Maastricht last December, the pair redeemed itself in Munster. The piaffes and passage were good again, even though the second piaffe travelled too much forward. The tempi changes were lovely but in the second trot extension, the passage was picked up too soon and in the third there was a loss of rhythm.

Buchwald's trainer Isabell Werth saddled her student Lisa Müller's 12-year old Dutch warmblood mare Anne Beth (by Oscar x Corleone) and finished fifth with 70.100%, a surprising high score as there is still a lot of work to be done for the mare to establish itself at Grand Prix level. The partnership is still quite new, but it showed and the Grand Prix test was a real work-out for Werth. 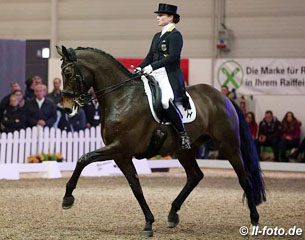 The Dutch mare was very swooshy with her tail and overall the hindleg engagement failed (e.g. in the trot and walk extensions, passage and piaffe). Anne Beth is slightly long in the back, so it's more challenging for the hindlegs to reach under. In Munster though they were not enough moving towards the point of gravity. In piaffe she did not take the weight on the hind quarters nor shoved the hindlegs under the body but instead she got narrow behind, almost crossed.  She was counter bent in the first passage. Werth is a master at still getting a good rhythm going in those highly collected movements. There was a mistake in the two tempi's, the flying change after the extended canter was a double beat. The one tempi changes were much better but lacked ground cover. The mare stalled before the pirouette left, but the pirouettes had promise. It's work in progress.