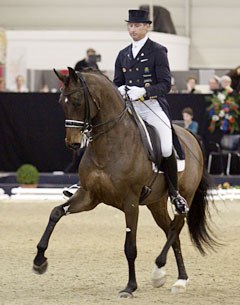 Wladimir OA is bred in The Netherlands by O. Anema and is by Flemmingh out of Flora (by Florestan x Donnerhall x Lemon xx). He was licensed as a stallion with the Swedish warmblood society. He did his stallion performance test in 2007 and scored 8.8 for his basic gaits (8 for walk, 9 for trot and canter).

As a youngster the horse was owned by Swedish horse dealer Birgitta Kjellin. Her business partner Johan Ifversen later on shared official ownership together with Pernilla André who became the horse's rider.

Under Pernilla Andre Hokfelt, Wladimir became the 2008 Swedish Young Horse Champion. They represented Sweden at the 2008 and 2009 World Young Horse Championships in Verden, where they were 12th and 8th in the consolation finals. In 2011 they began competing internationally at small tour level and one year later the horse moved up to national Grand Prix level. He was gelded in 2012.

From December 2013 till January 2015 the stallion was with Patrik Kittel for training and to be sold, but in the winter of 2015 the horse returned to Hokfelt in Sweden and needed a year to recover from injury. The pair returned to the show scene in 2016. Pernilla competed him only once in a CDI in 2016: at the CDI Falsterbo last July the duo placed seventh in the Grand Prix and Kur with 65.160% and 71.225%. The month before they were sixth in the 2016 Swedish Grand Prix Championships at Stromsholm. 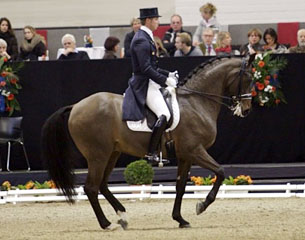 Wladimir then moved to Andreas Helgstrand's sales yard, where he became the horse for the recently arrested Korean rider Yoora Chung. Swedish equestrian magazine Tidningen Ridsport reported that the Swedish owners sold Wladimir OA to Helgstrand Dressage A/s in October for Chung to ride. The same day when the news of Chung's arrest was released by DK Nyheder (2 January 2017), Dutch equestrian magazine De Hoefslag reported that Wladimir OA sold to assistant trainer Simone Pearce, who cited that she "began riding him two months ago." Pearce was of course familiar with the horse at the yard and her mother Robyn has now bought him as future Grand Prix ride for her daughter.

The 25-year old Australian born Simone Pearce has been living and working in Europe the past seven years. She began in Germany, then moved to Johan Rockx' yard in Belgium, then to Holland where she was based with Peter Perlee and at Platinum Stables, before heading to Denmark to work at Helgstrand's.

In 2013 Pearce began competing internationally in the 25 classes on Little Lion, but she also showed Diavolino, Furstentraum and Salvador. She represented Australia twice at the World Young Horse Championships: in 2015 on the KWPN mare Felicia and in 2016 on the Oldenburg mare Fine Time.