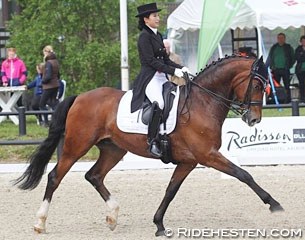 The South Korean dressage rider Yoora Chung has been arrested by the Danish police after having been in hiding in the Aalborg area in Denmark. Chung's mother Soon Sil Choi is closely involved in the major scandal that has led to the biggest nation wide street protests in Korea and Korean president Park facing impeachment.

The president and Choi collaborated on establishing sport and culture foundations to which major corporations, such as Samsung, have donated money up to an estimated 70 million USD. Part of this money, as well as other funds from benefactors, has been spent on buying a hotel in Germany and supporting Yoora Chung's dressage career in Europe. The scandal has been named Choi Gate in Korea.

Yoora has been competing Grand Prix horse Vitana V and small tour horse Rausing at international FEI level. She found both horses at Andreas Helgstrand's yard in Denmark and has been training and staying in the country. She was supposed to compete at the CDI-W Odense in October but scratched last-minute when the presidential scandal in Korea was in full swing.

Chung has been in hiding since then and Interpol was looking for her. DR Nyheder has now reported her arrest and stated that the 20-year old Chung will be extradited to her home country where she will face accusations for obstructing investigation.

On Royal Red, Yoora Chung (also known as Yooyean Chung) was member of the gold medal winning team at the 2014 Asian Games.