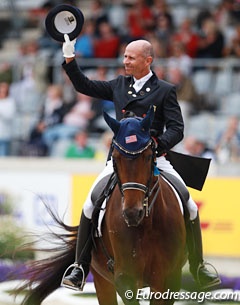 The United States Dressage Federation (USDF) has named the 14-year-old Westfalian gelding Legolas, owned by Akiko Yamazaki's Four Winds Farm and ridden by Steffen Peters of San Diego, California, the 2016 USDF Grand Prix Horse of the Year. Legolas' median score of 77.160 percent made him the top horse in the United States competing at this level and the recipient of USDF's highest honor for the fifth year in a row.

Legolas was recognized at the 2016 USDF Salute Gala and Annual Awards Banquet with a commemorative personalized plaque, an embroidered cooler, and a gift certificate provided by Dressage Extensions. Also, Legolas is the recipient of the Colonel Thackeray Award and will have his name engraved on a silver trophy to be on permanent display in the Roemer Foundation/USDF Hall of Fame housed at the USDF National Education Center, located at the Kentucky Horse Park.

“USDF is thrilled to be able to recognize this extraordinary horse for his many accomplishments during the 2016 competition season. We also congratulate his owner Four Winds Farm, Akiko Yamazaki, his rider Steffen Peters, and the entire Legolas team,” stated USDF Executive Director Stephan Hienzsch.