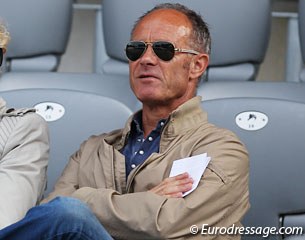 The 62-year old Van der Schaft will take up his new position as of 1 January 2017.  The former international dressage rider is excited about his new job.

"I'm tremendously looking forward to being team coach," said Van der Schaft. "For a trainer it is great to work with the best Dutch dressage riders. With much joy I will put my knowledge and experience to use for the Dutch dressage top. Together with my colleague youth team trainers and riders I hope to produce nice achievements in the next few years."

The Dutch Grand Prix team trainer used to be in charge of the Under 25 Grand Prix riders as well, but this function has been handed to the new Dutch Junior/Young Riders team trainer.

Van der Schaft, who had already applied for the job as U.S. Team trainer in 2013 but lost the position to Robert Dover, runs a professional dressage yard "Stable Sprengenhorst" with his wife Inge and daughter Romy. Rien has trained and competed nine horses up to Grand Prix level. He was member of the Dutch team from 179 till 1983 and competed at the Alternate Olympic Games in Hoodwood, two European Championships and one World Championship.