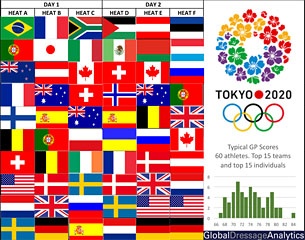 Our guest columnist of the week is regular contributor David Stickland of Global Dressage Analytics who weighs in on the new format for the 2020 Olympic Games in Tokyo, Japan. The format has undergone several drastic changes which have spiked much criticism from the riders and equestrian press.

At the FEI Meeting in Tokyo on 22 November 2016 the General Assembly voted in favour of Olympic and Paralympic rule changes. So what are these changes and how might our sport be affected by them? Back in March 2013 I wrote an opinion for Eurodressage on the benefits of changing from teams of 4 to teams of 3 and of bringing in more national teams, some of the bigger dressage nations are not so pleased with this change but I thought then and I still think that it is for the good of the sport. In this article I review the proposals and run a simulation to see how the games might work out in 2020.

The key feature of the new proposals are teams of 3 riders instead of 4, but that of course allows for there to be 15 teams instead of the 10 that qualified for Rio and a further 15 individuals representing 15 other nations. In this way 30 nations would be represented in Tokyo. The detailed qualification system has yet to be defined, but we can imagine there will be a component to encourage worldwide participation. Every qualified team can also bring a reserve horse or combination.

Firstly, I thought it might be useful to look at some other sport: In the men’s 100m sprint in Rio there were 89 entries from 58 different nations (and another 70 entries for the women), of them 22 started in a preliminary round, 69 went through the heats, 22 in the semis and 8 in the final. Only one got the Gold medal of course, just as in every other discipline. Admittedly each athlete competed for only 10 seconds and 8 of them went at a time while in Dressage we take a bit longer, but the important principle here is that 89 individuals and their NOC’s were very happy to go to Rio and compete, maybe 5 or 6 of them thought they might have a medal chance, but that didn’t and doesn’t matter.

Participation in the Olympics is a pinnacle of every athlete’s dream, winning is magnificent for a few of them but the whole world followed their athletes independently of their medal chances. Sending many nations to the Olympics, as long as the overall quality is appropriate, is brilliant for our sport.

New Format to Bring Out More "Eddy the Eagles"?

There is concern that such a system might result in too many less accomplished athletes competing in the Olympics, that many of them will be at the bottom of the field, “Eddy the Eagles” scoring 59%” was a quote from one critic.

I took the June 2016 ranking list and just applied an arbitrary selection to pick the top three (different) athletes from each country, find the 15 nations that would qualify that way from the simple sum of their ranking points and identify the 15 other athletes that would qualify by that method. I don’t for a moment imagine this would be the selection criteria, but it gives us an idea of how the games might be composed. In the men’s 100m sprint the range of times was from 9.81s to 11.89s, you could call that a 20% range. In my example selection the lowest ranked individual qualifier has an average Grand Prix score of 68%, which is about 20% below the top ranked Grand Prix score – so let’s stop shooting ourselves in the feet and talking about dilution of the sport and domination of the Eddies!

Maybe you would like to know which nations and individuals were selected by my simple algorithm? Teams: AUS, AUT, BEL, CAN, DEN, ESP, FRA, GBR, GER, NED, POR, RUS, SUI, SWE, USA. Individuals: BLR, BRA, EST, FIN, IRL, ITA, JPN, LUX, MEX, NOR, NZL, PLE, POL, RSA, UKR. Certainly the real algorithm will be different, for example the host nation can always qualify a team. But if you look at this list you see it is already well on the way to having some regional balance.

What if we took instead the view expressed in a recent opinion article, that we just send the very top combinations, I saw a suggestion of just the top 12 (!) (“dressage is only thrilling to watch when the final 12 start”). Then we would have just 7 nations represented, and only Germany with a team of 3! I think that’s what we call the World Cup Final; it has a very important place in our sport where we do bring together the top individuals, but it has nothing to do with the spirit of the Olympics.

So now I get off my high horse (sic) and get back to the changes that were voted in Tokyo at the FEI General Assembly. The Grand Prix becomes a dual-qualifier, it qualifies the top 8 teams that go onto the Special for the Team medals and it qualifies the top 18 riders that go on to the Individual Freestyle final. The Team qualifier is easy to understand, it is just the sum of the three GP scores for each nation, the top 8 teams go on to the Team Medal competition with the Grand Prix Special. But there is a real revolution in the way the individuals qualify for the Freestyle and one that is designed to spread the interest over the two days of Grand Prix. With 60 riders the GP is organized as 6 heats with 10 riders in each. A formula based on the ranking list assigns riders to heats (while making sure two riders of the same nation are not in the same heat and a maximum of two riders per nation start each day). A possible example is shown in the figure, so for example that last heat (F) is the last 10 riders on the second day and is composed of riders numbers 1,7,13,… on the ranking list. The top two riders in each heat automatically get a place in the Freestyle, then the top 6 scoring riders on the two days after removal of the 12 already qualified, get places in the Freestyle too.

So every two hours or so two new riders qualify for the Freestyle, it is exciting and you will want to watch the whole two days! The Individual Final (Freestyle) is then run in the same way a freestyle is always run. But the Team Final (Special) is different and again the new proposals enhance the sport and the excitement.

Novelties in the Grand Prix Special

The team final consists of 8 teams of 3 riders riding the Grand Prix Special with no drop scores. The Grand Prix Special will be ridden to music chosen by the rider, but the music is not itself judged – though one can imagine a successful or unsuccessful matching of music and ride might influence the collective marks. Each of the 15 teams can bring a reserve combination and they can use that combination in the Special without veterinary justification, so they can use them tactically. Participation in the Special has no influence on participation in the Freestyle, so this allows for a tactical choice and also supports horse welfare allowing the team to decide to save a horse for the Freestyle or to replace a horse that has some health issue. National teams will certainly have to take horse welfare even more into account knowing that they can’t take a risk on a bad performance. No drop score of course also means that an elimination or problematic performance will remove a team from the medal chances, but that, in my opinion, is sport - sometimes it will happen. In the 4x100m relay you don’t get to drop the time of the runner whose shoe-laces came undone.

I’m really in favour of this proposal, it makes the Olympic version of the sport more inclusive, it does not fill the starting list with underqualified combinations, it is more exciting in both the Grand Prix heat system and in the Team medal climax, it supports horse welfare both implicitly and explicitly and each stage is more understandable.

One thing I have read recently is “Why are we doing this? Did the IOC explicitly ask us to do this?” I don't of course know what the IOC asked, but I strongly suspect that doing nothing will not be good for Equestrian! One of Kyra Kyrklund’s favorite sayings is “If you always do what you always did, you will always get what you always got”; in our case that would be very bad. Many other sports are aggressively revisiting the format of their events, we have to aggressively address the issues for our sport. Change is surely necessary, building understandability for established and for new fans while not undermining the features that we consider to be key to the sport are requirements; but not all possible changes are good. Tweaking the content of a dressage test is not to my opinion sufficient, while the suggestions to radically reduce the number of participants (the 12-best discussed above) are especially dangerous as they drastically reduce the worldwide implication in the sport – the wish to one day compete in the Olympics for your country is a powerful motor and these rule changes go directly towards making that dream more achievable for riders from more countries without undermining the quality of top level sport.

Back these changes up with much more detailed “second-screen” information for the public, one of my other hobby-horses, and we can help cement our place into future Olympics.