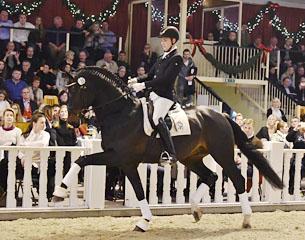 The 37th P.S.I. Auction was one of the best ever, this was the unanimous opinion of P.S.I. Organizers Paul Schockemöhle and Ulli Kasselmann in the follow-up to the auction. With a total of 16,501,000 euro in proceeds for 48 horses sold, the gentlemen’s feelings were confirmed. The stunning black Ferrari became the price highlight of the auction, selling for 1.5 million euro.

The 4-year-old Oldenburg stallion Ferrari (by Foundation x Hotline) already won the stallion division at the Oldenburg Regional Young Horse Championships in Rastede and he was an exceptional appearance in the auction arena. As described in the catalogue, he is an “outstanding dressage prospect without any ifs and buts”. French born and Luxembourg based banker Patrice Mourruau of Dressage Grand Ducal in Luxembourg won the bid for 1,5 million euro. Mourruau is a sponsor of Luxembourg Grand Prix rider Sascha Schulz and his partner, international judge Christoph Umbach. They are looking forward to the further training of their new Ferrari. Last year Mourruau purchased Quel Filou at the PSI Auction and under Schulz the horse won silver at the 2016 World Young Horse Championships.

The 4-year-old bay Revenant turned out to be the second most expensive horse of the auction. He was the 2016 Westfalian Young Horse Champion. The highly attractive stallion who particularly shone with his amazing canter, enchanted many customers around the globe and caused an exciting bidding duel. The progeny by Rock Forever out of a Sir Donnerhall I-dam finally was acquired by by Bavarian stud Ammerland for 1.1 million euro. 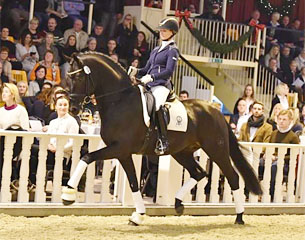 Two exceptional show jumping horses continued the series of extraordinary auction horses. Chaconeta became the most expensive jumper, selling for  960.000 euro to Switzerland where she will meet her new stable colleague Stalognia, the 2015 top-priced P.S.I. auction horse. The six-year-old bay mare is ready to do 1.35 m show jumping courses and already won the gold medal at the 2016 “Deister” Show Jumping Championships. “Her sire Chacco-Blue is my favourite stallion, and I think her dam’s sire, Cornet Obolensky, is the best jumper stallion worldwide,” explained Paul Schockemöhle the specialty of this year’s top jumper.

Second most expensive jumper was Stakkatan, a 5-year-old Stakkatol-son who was sold to Poland for 900,000 euro. Stakkatol already presented the top-priced jumper in 2014 and 2015 and thus confirms his extraordinary genetic potential. Stakkatan himself already achieved super performances in international young jumper development classes under the Japanese Olympic rider Koki Sato this year.

The 37th P.S.I. Auction confirmed that it is possible to earn good money for good horses and that the philosophy of Performance Sales International becomes increasingly popular at the international level. “Particularly regular customers rely on the mutual trust à la P.S.I. and appreciate the extraordinary service,” summarized Schockemöhle. His partner Ulli Kasselmann added that it again proved to be true that the studs Lewitz and Osthoff are regularly producing extraordinary horses such as this year’s best-priced horses. “Our customers know that we know most of the horses from birth, and they treasure their excellent nursery just as their quality.” Kasselmann is also quite confident when looking at the future and to also compiling another amazing auction collection next year.