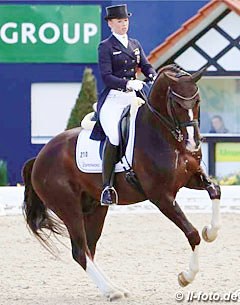 Fabienne Lutkemeier has been forced to withdraw Flynn PCH from competing at the 2016 Louisdor Cup Finals for German Developing Grand Prix horses in Frankfurt on 16 - 18 December 2016. The liver chestnut stallion has injured himself. The pair will be replaced by Isabel Freese-Bache on Sam's Ass.

Lutkemeier began campaigning the 10-year old Hanoverian stallion Flynn PCH (by Falsterbo x Walt Disney) in 2016 after the liver chestnut was first competed at FEI level by Hubertus Schmidt's bereiters Marcus Hermes and Emma Kanerva and then by Schmidt himself. The stallion is owned by Nancy Gooding of Plum Creek Hollow in Colorado, USA.

Lutkemeier and Flynn PCH qualified for the Louisdor Cup Finals in Donaueschingen last September. Unfortunately the pair will not be appearing in Frankfurt.

"He has sustained a small injury and needs a brief break," said Lutkemeier. "The Finals just come too soon. It's such a pity but we decided to withdraw from the finals in agreement with the owner. We don't want to put any pressure on him, so he will get the time to recover and pick training again. It's a great pity, but I'm looking forward to next season with him. We have really connected now and he gives me great pleasure to ride."