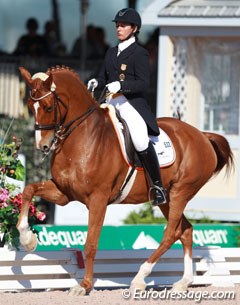 Hotmail is by Michellino x Havel x Veritas and has been Catherine's sole Grand Prix ride since 2013.  In February 2015 Haddad sold Hotmail to her client and sponsor Rowen 'O Riley but Catherine retained the ride on the chestnut gelding. After finishing the 2015 Florida show season, the pair travelled to Europe for a summer tour and contested the CDI's in Fritzens, Falsterbo, Cappeln and Verden.

Haddad had hoped to qualify Hotmail for the 2016 Olympic Games but after a busy season in Wellington, they were not selected and rode their last CDI in April with a 67.460% score in the Grand Prix and 68.941% in the Special. Haddad finished 12th on the U.S. Olympic team ranking.

"Rowen and I decided to invest in some younger horses for the future. Andreas bought Hotmail," Haddad told Eurodressage. The duo decided not to keep Hotmail as a schoolmaster. "Rowen is a developing rider and needs a different type of horse. So I found her a really good school master."