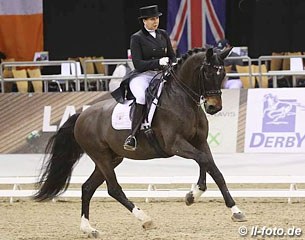 In the Grand Prix, Moscow based Merkulova and the 12-year old Trakehner Mister X (by Egeus) mesmerized the judging panel - consisting of Maurel, R. Richenhagen, Holthaus, Peutz, and Whitham - and posted a winning score of 77.720% Her marks ranged from 75.500 (Maurel) to 80.700 (Whitham), but all judges had her first.

Aboard her piaffe-passage super star, Merkulova went on to win the Grand Prix kur to Music in which she topped the board in a field of six riders.  The pair scored 81.525% and was miles ahead of the second place Jan-Dirk Giesselmann on the 12-year old home bred Hanoverian Real Dancer (by Rubin Royal x De Niro) who was second with 75.225%.

A five months pregnant Laura Tomlinson (née Bechtolsheimer) posted personal best scores on her 10-year old Westfalian mare Rosalie B (by Rubin Royal x Newcastle). She was second in the Grand Prix with 74.400% and won the Grand Prix Special with 75.882%. 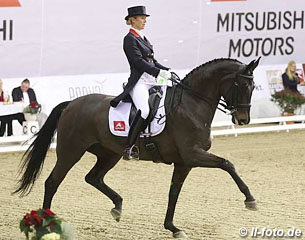 "I was super happy," Laura told Eurodressage. "Since July I've spent not competing but doing "homework" with Rosie and building her strength. She was really concentrated in the arena and has hugely improved. I can still improve the piaffe and pirouettes more, but they are much stronger than they were in July and she is a really fun horse to show."

Tomlinson will head next to the 2016 CDI-W London and then will take a pregnancy break until her baby is delivered.

"I hope to be riding again the second half of April some time, assuming all well. Then I have to see how long it takes me to get my horses competition ready. I hope to compete (..) hopefully in time to be on the team for the Europeans next year. I have some young ones I'm super excited about too. So the future is looking fun!"