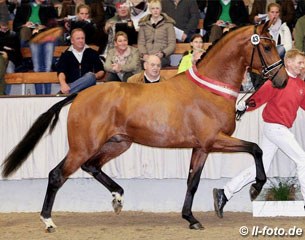 The 2016 Westfalian Stallion Licensing became a Dutch party with the top three ranked stallions all being sired by KWPN bred and registered stallions. Valverde (by Vitalis x Ampere) became the undisputed champion of the Licensing in Munster-Handorf on 23 November 2016. Zoom (by Zack) and a Bretton Woods offspring completed the top three in the premium ring.

The Westfalian breed society has been carrying out a very open policy towards other breeds the past few years and although there is little preservation of the original lines and safekeeping of the identity of the breed going on, the commercial side of this new strategy is certainly paying off. 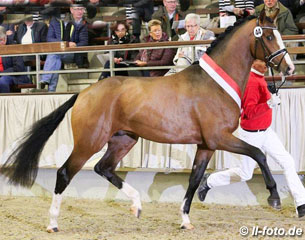 A total of 47 colts were entered for licensing, two dropped out, and 28 received a positive verdict from the licensing committee. Eight dressage stallions were named premium and the top two truly excelled.

Valverde (by Vitalis x Ampere x First Final) is bred by Eugene Reesink and owned by Reesink in partnership with Andreas Helgstrand. The bright bay colt showed a superior trot with a very active, engaged hind leg, an uphill tendency and much suppleness. This colt was not for sale.

The reserve champion is the bay Zoom (by Zack out of SPS Diva Dannebrog (by Don Schufro x Brentano II x Arogno)), bred by Dorthe Jeppsen and owned by Blue Hors Stud. The very sympathetic bay stallion has three very good basic gaits and is a sporty athlete despite being a bit heavier set. He will stand at the Warendorf state stud. 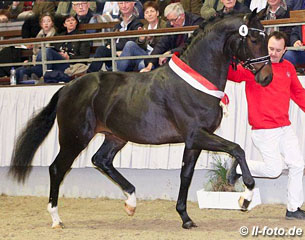 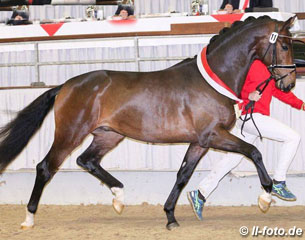 At the auction following the licensing 31 licensed stallions were sold and they achieved an average price of 87,645 euro, mainly thanks to the fact that the price highlight was the show jumping licensing champion (by Kannan x Verdi) which Klosterhof Medingen and Gestut Westfalenhof paid a whopping 620,000 euro for!  The dark bay Zarathustra MT (y Zonik x Florestan) sold for 187,000 euro to Sissy Max-Theurer, and the Jazz x Flemmingh fetched a price of 110,000 euro. The non-licensed stallions sold for an average price of 22,209 euro.