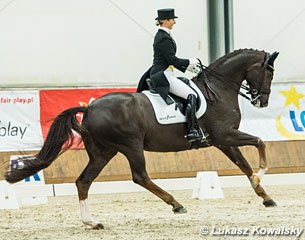 Australian Olympian Kristy Oatley and her top mount Du Soleil are off to a flying start on the indoor show circuit after the 2016 Rio Olympic Games. After getting into gear at the CDI-W Odense in October with a fourth place finish, Oatley and Du Soleil won the Eastern European League World Cup qualifier in Zakrzow, Poland, on 4 - 6 November 2016.

The pair placed second in the Grand Prix with 70.560% behind German Juiane Brunkhorst on Birgit Madsen and Pferd 24's 11-year old Hanoverian Furstano (by Furst Heinrich x Brentano II). In the Kur to Music, however, they topped the board with 75.200% and earned valuable world cup ranking points and referred Brunkhorst to a second place.

In addition to a World Cup sweep, Kristy also scored a double victory aboard her second Grand Prix horse Swagman, a 12-year old Oldenburg by Sandro Hit x Don Schufro, in the 3* CDI tour. The black gelding earned 69.680% in the Grand Prix and 70.843% in the Special. 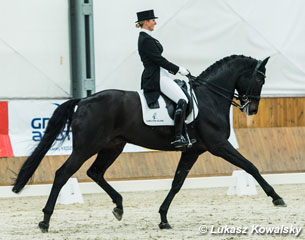 "I was thrilled with both of my horses on the weekend," Kristy told Eurodressage. "I believe that Swagman's confidence in the arena has improved. This of course leads to our concentration being more focused, where I can start to ride him through the test. Du soleil is also more confident in himself, where he is waiting for me now instead of jumping ahead of himself to show everyone what he can do. Düse is great in a freestyle because we are now at that stage where we can show some difficult transitions and movements."

Oatley does not cite the 2017 World Cup Finals in Omaha, Nebraska, as a goal written in stone, she's leaving her ambitions for the 2017 show season open. "I would like to ride a few more World cups, and see where this takes us," she said.