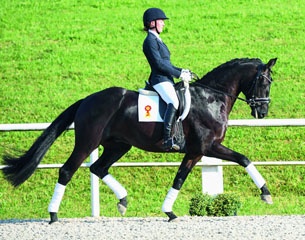 Bred by Norbert Humpf, First Class H is by Furstenball x Rotspon and sold for 93,000 euro to an Austrian.

The 3-year old black stallion Durello (by Destano x Sancisco) who was licensed during the Marbach Under Saddle Licensing that same weekend, sold for 50,000 euro to the Marbach state stud. Durello is bred by Gut Hohen Luckow Milch and was owned by Training Stable Am Weinberg.

Forty-two horses were presented for auction in Marbach, which is 11 more than at the spring auction. The average price for a horse at this auction was 22,480 euro.