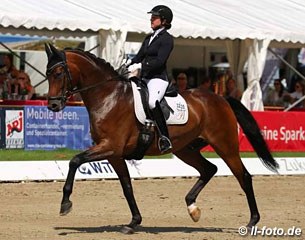 At the 2014 Bundeschampionates the pair was unsuccessful in the consolation finals and could not produce a score on the board. Reiser and Sunlight contested the selection trials this year for the German for the inaugural 7-year old world young horse championship in Ermelo.

American Grand Prix rider Cindi Rose Wylie got married to Stephen Schubert on the weekend of 22-23 October 2016. The wedding was celebrated in the Wharf Room at the Boston Harbor Hotel with dressage personalities, such as judges Lois Yukins and Janet Foy, as well as USDF president George Williams and his wife Roberta. The 53-year old Wylie last competed internationally in 2010. From 2008 till 2010 she rode the Morgan cross gelding Audacity (by Tenacity x Courage of Equinox) at international GP level in the U.S.A.

American Grand Prix rider Susan Dutta has switched trainers, but not location in Germany. Dutta has moved her horses from Christoph Koschel's yard Hof Beckerode in Hagen, to Holga Finken's business at Stall Sudhof in Hagen. Susan will keep five horses in Europe this winter and take two horses back to her home in Wellington, Florida, to compete on the winter show circuit there.

Dutch Olympian Diederik van Silfhout will become a father for the second time. His girlfriend Cindy de Mooy is expecting a baby with the 28-year old Dutch team rider. The 28-year old Diederik already has one child, 3-year old son Sylvester, from his previous relationship with ex-wife Irene Hoffman.

Korean Yoo-Jin Jeoung has acquired the 13-year old Oldenburg licensed stallion Diamonit (by Diamond Hit x Santander H x Freiherr) last June. The dark bay stallion was originally owned by Tiny and Sarah Pidgley and then by Eva Maria Aufrecht, but was returned to the team of PSI to be sold. Diamonit is currently being trained by Hof Kasselmann rider Nicole Wego, who recently scored 67.984% in the Short Grand Prix at the Ankum Riding Club competition at the end of October.

The State stud of Warendorf has leased the Blue Hors' stud owned 4-year old licensed stallion Dreamline (by Don Olymbriox Hotline) for the 2017 breeding season. The stallion was stand at stud at Warendorf's partner station of Mathieu Beckmann in Wettringen, Germany. Swedish Jessica Andersson will continue the training of the horse.

Dutch FEI rider Joyce Lenaerts has lost her first Grand Prix horse Heracles. The Dutch warmblood (by Clavecimbel x Stuyvesant xx x Duc de Normandie) was born in 1989 and 27 years old. The bay gelding, which Joyce nicknamed Stuifje, was her junior rider's mount. He took her through the levels from junior to young riders and up to Grand Prix. The horse spent his retirement in the field at Lenaerts' yard in Leende, The Netherlands.

Belgian equestrian photographer Dirk Caremans was mistakingly announced as the Belgian show jumping team trainer and chef d'equipe on a Belgian equestrian news website (they should have written Dirk Demeersman). What a way to celebrate his 58th birthday on 4 November 2016.