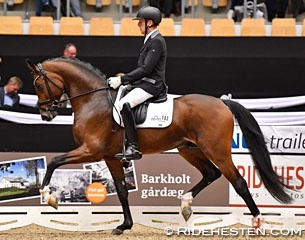 The 4-year old Hesselhoj Donkey Boy, the 5-year old Victoria's Secret, and the 6-year old Fiontini became the grand champions of the 2016 Danish Young Horse Championships held at the 2016 CDI-W Odense in Denmark on 19 - 21 October 2016. The Danish Young Horse Championships are open to all breeds and the Finals take place after a series of qualifiers in the spring and summer and a semi finals held three weeks ago.

The 4-year old division was total domination for rider Jan Møller Christensen who captured the gold and silver medal and a fourth place aboard the three horses he qualified for the Finals on Friday. With Kristin Andresen's Danish warmblood stallion Hesselhøj Donkey Boy (by Era Dancing Hit x Milan) he topped the board and won the title with an 9.6 point total.  Aboard Andresen's Romeo (by Romanov x Wolkentanz I) he scored silver with 8.640 points. Blue hors head rider Daniel Bachmann landed the bronze aboard the chestnut German bred Sarcander (by St. Moritz Jr x Don Schufro) with 8.8 points. 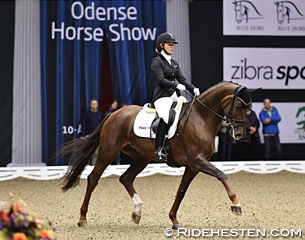 The judges praised the winner Donkey Boy for its "wonderful, cadenced and balanced trot, which gets a bit wide behind in the lengthenings. The canter is lovely and uphill and the walk is his highlight." The bay stallion scored 10 for walk and 10 for rideability. Romeo, on the other hand, impressed with his "lovely expression, good spring and energy. The canter is cadanced with good balance and he works well over the back in walk." The dark bay Romeo got 9.2 for rideability.  Sarcander was praised for "working well in trot and has a good balance in canter."

In the 5-year old division Danish Olympian Anna Kasprzak steered her newly acquired Rhinelander mare Victoria's Secret (by Vitalis x Fidermark) to victory with a total of 9.80. Kasprzak has been riding Victoria's Secret for less than a month and the liver chestnut mare equally impressed the judges in Odense as she did in Ermelo. She scored 10 for trot, canter, rideability and potential. Betina Jaeger Jensen scored a double, finishing in silver medal place with the German bred Quantum Touch (by Quaterback x Royal Dance) on 8.980 points. Betina also earned bronze aboard the mare Flora (by Floriscount x Hohenstein) on the same amount of points, 8.890. 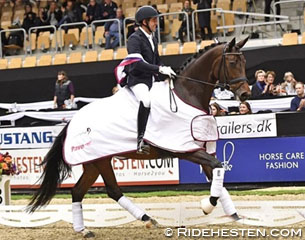 In the 6-year old division it was no suprise that Spanish Severo Jurado Lopez won the gold aboard the Swedish owned Danish warmblood mare Fiontini (by Fassbender x Romanov). Sold a week ago to Swedish young rider Beata Soderberg, Fiontini scored a whopping 9.860 points for victory. Judge Susanne Baarup praised Fiontini for "the swing in her trot, self carriage and elasticity, what more can one wish for. The trot earned a 10, the walk a 9.5, and the canter a 10. "The canter is big and ground covering and Fiontini showed a remarkable ability to collect." Anne Troensegaard grabbed the silver aboard her Trakehner bred stallon Kipling (by Hofrat x Hohenstein) after scoring 8.740 points. Sanne Henningsen steered the black Danish bred Wilson Stensvang (by Wilkins x Don Schufro) to bronze with 8.680 points.