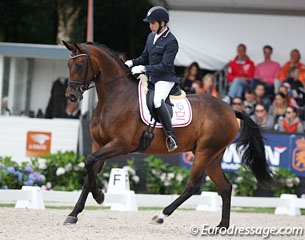 The double World Young Horse Champion Fiontini has been sold to Beata Söderberg from Sweden. The Danish warmblood mare will remain in training at Helgstrand Dressage in Denmark.

Bred and owned by Hanne Lund and Henrik Hansen, the 6-year old Fiontini is an embryotransfer by Fassbender x Romanov.

Under Spanish Severo Jurado Lopez the dark bay mare won the 2015 and 2016 World Championships for Young Dressage Horses in Verden and Ermelo and will be competing at the 2016 Danish Young Horse Championships in Odense this weekend.

"We know Beata really well as she trains with us daily," said Andreas Helgstrand, who has managed the horse for her breeders the past two years. "She and Fiotini are a fantastic match and we are happy that Fiontini stays in our barn so that we can continue to contribute to her positive development."

Beata Soderberg is a 21-year old rider from Sweden who has made her international show debut at young riders' level in 2015 aboard the now 11-year old Oldenburg mare Sitana (by Sir Donnerhall x Gepard). This year she rode the 9-year old Oldenburg mare Hilfiger (by Hotline x Argentinus) at one CDI in Odense in May.  She began her FEI level dressage career with her ponies Rovalds Zurfin Gun and José in 2010.