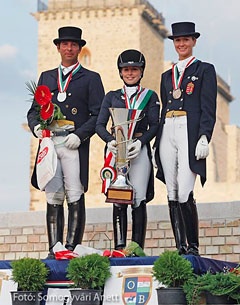 Nikolett Szalai became the brand new Grand Prix Champion at the 2016 Hungarian Dressage Championships held in Diosgyor, Hungary, on 9 - 11 September 2016. The pair was a league of their own placing far ahead of the rest of the field of six which determined the big tour championship.

Szalai and her 11-year old Hanoverian Willy the Hit (by Wolkenstein II x Brentano II) reigned supreme at Grand Prix level winning each round with a major score advantage. She posted 70.579%, 68.540% and 72.125% to earn the gold medal, champion sash and national title with a total of 211.244 points. Szalai works as trainer at the Mariakalnok equestrian centre.

"I didn't expect to win. I only wanted to show good tests," said an ecstatic Szalai, who has followed her coach Robert Acs from Germany to Hungary in his move back home last year. "Willy was really good form in the competition." Szalai has been riding her Hanoverian since he was a 4-year old and now hopes to make her big international break through in 2017. "I really want to ride many international competitions next year and I really hope to go to the European Championship as well."

The 2016 Hungarian Championships also featured Nationals in three further divisions. As Hungary still has a smaller group of youth riders, they were paired together in classes not based on age but on performance level.