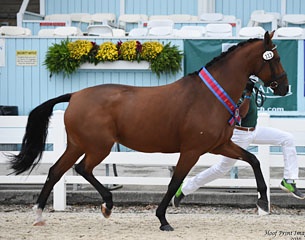 The Danish bred mare Stenagers Welina has reclaimed her title as Grand Champion of Devon winning the overall champion at the 2016 Devon Breed Show on Wednesday 28 September 2016.

The 7-year old Danish warmblood Stenagers Welina (by Wilkens out of Stenagers Santana (by Sandro Hit)) is bred by Bjarne & May-Britt Cristensen nd owned by Nancy Radtke. Welina first came into the spotlight selling as a foal at the 2009 Danish warmblood Elite Foal Auction. She was imported into the U.S.A in 2014. She won last year's 2015 Devon Breed Show's Grand Championship and reigned supreme this year as well. She also won the Mare Championship and Mature Horse Championship title earlier that day.

The reserve grand champion is the 5-year old Finery, an Oldenburg stallion by Furstenball out of Sanetta (by Diamond Hit), bred by Otto Langemeyer and owned by Anne Howard. Finery also won the Stallion Championship in the afternoon. He has been presented in hand by Michael Bragdell.

Two further horses were invited into the Dixon Ovan to contest the Grand Championship. They were the yearling gelding Diamond Quinn, a Hanoverian by Diamond Hit out of Quintessa MF (by Quaterback), bred by Susan White & Deborah Bly and owned by Susan White; and the 3-year old Hanoverian mare Royal Celeste FH (by Royal Classic out of Dlorienne (by Diamond Hit)), bred by Eliza Rutherford and owned by Quinnten Alston.

Born in the USA 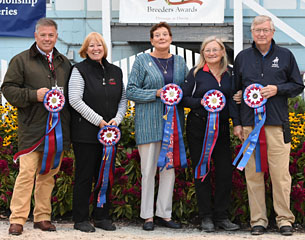 The "Born in the USA" Breeders Awards was started at Dressage at Devon in 2003 and since that time other shows have followed suit. The class features foals born in the US, and these horses prove that the US can successfully compete with international breeders. Prize money is divided among fourteen categories including Mares, Stallions, Fillies and Colts of 2016, Yearling Fillies and Colts, Two year old Fillies and Colts and others.

This year's class high score was earned by Royal Celeste FH (Royal Classic x Diorienne), bred by Eliza Rutherford and owned by Quinnten Alston of Colera MD with a score of 83.4000.