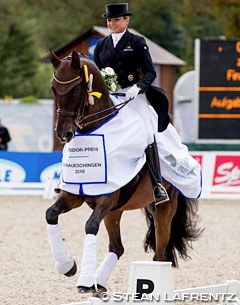 Schneider and the black stallion Sammy Davis Jr were the best in the small field of 12 horses, of which three had retired due to tense horses in the unnattractive Donaueschingen white tent and messy crane-with-floodlight ring. Schneider had her sympathetic stallion on the aids and rode him in a very open frame with a light contact. Sammy Davis Jr is a big, scopey mover with lots of knee action and lift and activity in the hindlegs, but like so many S-bred horses performing at Grand Prix level the hind legs struggles to become carrying. Schneider rode a very pretty test, nonetheless, and got the best out of her horse. The trot work lacked self carriage, especially in the traversal movements, but the willingness to go and work was there. In the passage there is lots of lift in the legs and the piaffe has a good rhythm and stays on the spot, but the hindlegs do not move properly under the body and he piaffes croup high. The canter extension was nice as well as the two tempi changes. He showed good ability to collect in the canter pirouettes, but the onset and the bending in the right pirouette were not so good. In the passage on the final centerline the left hind leg was not carrying equal weight and the end halt was with the hindlegs stretched out.

Fabienne Lutkemeier and Nancy Gooding's 19-year old Hanoverian stallion Flynn PCH (by Falsterbo x Walt Disney I) are a quite pair. The liver chestnut stallion with four stockings and big stripe is very appealing to the eye, especially in the well ridden trot work, but unfortunately the piaffe and passage totally underwhelms. The horse left the hindlegs in Paderborn and there was absolutely no push, nor engagement from behind. In the piaffe he takes zero weight on the hind legs. The tempi changes were straight and the pirouettes had potential. The score of 72.279% was generous.

Ulla Salzgeber and her 8-year old Westfalian gelding Sir Simon (by Samarant x Florestan) landed third place with 70.767%. The trot extensions were well regulated. The passage has a nice silhouette and the potential is there as the horse develops more power in the future. In the piaffe the liver chestnut is very willing to move the hindlegs under the body but he gets very narrow in the base and steps on his own hooves. The walk was well ridden, despite a fraction of tension in the collected walk.  The tempi changes were correctly executed, the right pirouette was a bit big. Overall the horse could have more uphill tendency in his movements. The final halt was not square. 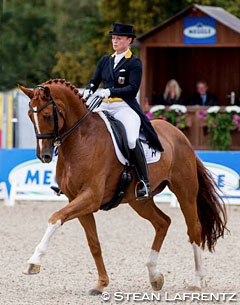 Isabell Werth relied on her star status to finish fourth with 70.721%. Her new ride Sorento, a 9-year old Westfalian gelding by Sandro Bedo x Florestan and owned by Madeleine Winter-Schulze, appeared very green today despite future promise. The first trot extension was conservative, in the trot zig zag he got slightly passage. The transition to the first passage was irregular, the first piaffe was way too much forward, then there was a break in canter before the trot extension. The second passage lacked collected, but the second piaffe was certainly the best one of the test. The horse again broke out of the rhythm in passage. The extended walk had good overtrack and the first canter extension was lovely althought the flying change at the end was sloppy with the rider leaning so far to the left she was almost hanging beside the horse. Towards the end of the test, Sorento ran out of steam. He fell out of the one tempi changes, changes lead in the big right pirouettes and the final passage was not entirely event. The 70.721% was a miracle score even though Werth certainly had yet another very promising horse in the making.

The Louisdor cup qualifier was streamed live on the internet and in order to keep viewers glued to the screen (and later on annoyed with long dragging commercials), riders have to dismount immediately after the test to give an interview, alongside O-judge Katrina Wust who also commented on the test. It is a pity that television/streaming demands are now infringing good horsemanship as none of the horses are properly cooled down right after their test. Surprising that riders don't object to it.