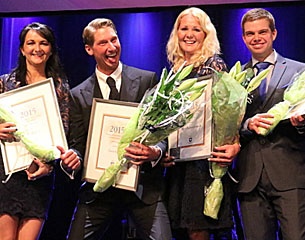 The Swedish Equestrian Federation has announced that the 2016 Swedish Riders Gala, the annual celebration and award ceremony for Swedish equestrianism, will not take place in 2016.

Instead, the federation has decided to postpone the 2016 edition until 22 February 2017 and it will relocate the event to Gothenburg.

The Swedish Riders Gala is annually held during the Stockholm International Horse Show in November. It is the Oscars for Swedish equestrian sport during which the federation hands out awards to the Breeder, Rider, Groom and Owner of the Year in all major equestrian disciplines.

As the 2017 European Championships in dressage and show jumping will be hosted in Gothenburg, the Swedish federation has decided to move the 2016 Gala to the 2017 CDI-W/CSI-W Gothenburg which takes place in February. The move is only temporary and a one-time occasion.

"The reason is that the European Championships take place in Gothenburg next year and that is why there will be a big focus on Gothenburg that year," said Lotta Amnestal who is the press officer for the Swedish federation.

The plan is that the 2017 Swedish Riders Gala will take place in Stockholm in November again, even though it will be uncertain if a 2017 edition will happen.